A. Scripture tells us the tabernacle of Moses faced east:

1.      It is interesting that the Tabernacle of Moses at Mt. Sinai (Al-Lawz) faced east. If you stood on the summit, you would look east over top of the tabernacle, which itself was facing east.

4.      "He brought me out by way of the north gate and led me around on the outside to the outer gate by way of the gate that faces east. And behold, water was trickling from the south side." Ezekiel 47:2

6.      "And these are the measurements of the altar by cubits (the cubit being a cubit and a handbreadth): the base shall be a cubit and the width a cubit, and its border on its edge round about one span; and this shall be the height of the base of the altar." Ezekiel 43:13

9.      " Moreover, the Spirit lifted me up and brought me to the east gate of the Lord's house which faced eastward. And behold, there were twenty-five men at the entrance of the gate, and among them I saw Jaazaniah son of Azzur and Pelatiah son of Benaiah, leaders of the people." Ezekiel 11:1

10.  "As for the gate of the outer court which faced the north, he measured its length and its width." Ezekiel 40:20

14.  "Now those who were to camp before the tabernacle eastward, before the tent of meeting toward the sunrise, are Moses and Aaron and his sons, performing the duties of the sanctuary for the obligation of the sons of Israel; but the layman coming near was to be put to death." Numbers 3:38

15.  ""Now those who camp on the east side toward the sunrise shall be of the standard of the camp of Judah, by their armies, and the leader of the sons of Judah: Nahshon the son of Amminadab," Numbers 2:3

B. History of Easterly oriented tabernacles, temples and altars:

D. Compass heading, orientation of temple of Solomon and Herod:

D. Western orientation of Christian churches: (opposite to Hebrew Temple) 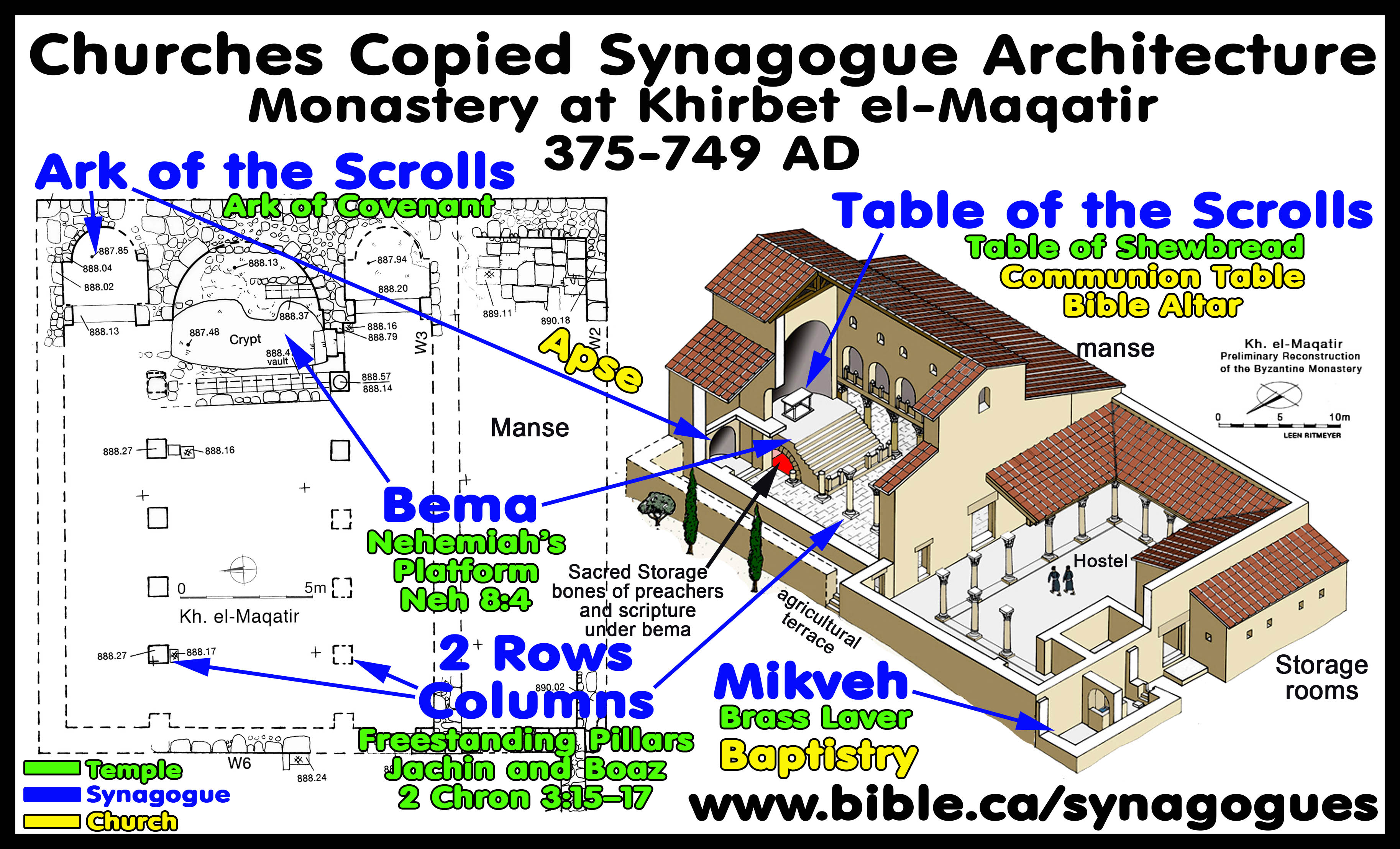 1.      The first Byzantine church buildings (after 327 AD) were oriented opposite to the Hebrew tabernacle and Temple:

a.       While the Hebrews worshipped YHWH with their backs to the rising sun, the earliest church buildings faced the rising sun in the east, perhaps in anticipation to the second coming of Christ “from the east”.

b.      “In early centuries, churches were built with the pulpit on the east end. The sun rises in the east, and believers were supposed to look to the east for Christ's return (Matt. 24:27).” (Encyclopedia of 7700 illustrations, To Face The East, 1996 AD)

c.       Christians has also suffered mercilessly at the hands of persecuting Jews from the earliest time and the Christians may have wanted to make a departure from Hebrew temple worship.

2.      The church grew directly out of Synagogue worship in the first century.

a.       Synagogues before 70 AD were randomly oriented on the compass and neither faced east or Jerusalem.

c.       By the time the first Byzantine churches were constructed, the Jewish synagogues were Jerusalem oriented as opposed to Eastern oriented.

3.      Byzantine reasons for east facing worship in 350 AD: "Concerning Worship towards the East: It is not without reason or by chance that we worship towards the East. But seeing that we are composed of a visible and an invisible nature, that is to say, of a nature partly of spirit and partly of sense, we render also a twofold worship to the Creator; just as we sing both with our spirit and our bodily lips, and are baptized with both water and Spirit, and are united with the Lord in a twofold manner, being sharers in the mysteries and in the grace of the Spirit. Since, therefore, God is spiritual light, and Christ is called in the Scriptures Sun of Righteousness and Dayspring, the East is the direction that must be assigned to His worship. For everything good must be assigned to Him from Whom every good thing arises. Indeed the divine David also says, Sing unto God, ye kingdoms of the earth: O sing praises unto the Lord: to Him that rideth upon the Heavens of heavens towards the East . Moreover the Scripture also says, And God planted a garden eastward in Eden; and there He put the man whom He had formed: and when he had transgressed His command He expelled him and made him to dwell over against the delights of Paradises, which clearly is the West. So, then, we worship God seeking and striving after our old fatherland. Moreover the tent of Moses had its veil and mercy seat towards the East. [this is wrong, it was west] Also the tribe of Judah as the most precious pitched their camp on the East. Also in the celebrated temple of Solomon the Gate of the Lord was placed eastward. Moreover Christ, when He hung on the Cross, had His face turned towards the West, and so we worship, striving after Him. And when He was received again into Heaven He was borne towards the East, and thus His apostles worship Him, and thus He will come again in the way in which they beheld Him going towards Heaven; as the Lord Himself said, As the lightning cometh out of the East and shineth even unto the West, so also shall the coming of the Son of Man be. So, then, in expectation of His coming we worship towards the East. But this tradition of the apostles is unwritten. For much that has been handed down to us by tradition is unwritten." (Hilary of Poitiers, John of Damascus. Chapter 12, 81, 315–367 AD)