Abraham and Lot separate and the location of Sodom

A.  Abram, Lot part their ways:

3.      He builds an altar between Ai & Bethel at the spot later known as Ai of Joshua.

5.      Pharaoh takes Sarai as his wife and is stricken by God. Pharaoh expels Abram.

7.      Lot chose the eastern Jordan valley, settles in the cities of the valley and moved his tents as far as Sodom.

B.   Location of Sodom: El-Hamman, Edh-Dhra or under salt sea?

6.      While Moses was standing on Nebo beside Shittim, viewed the promised land from Jericho to Zoar.

9.      There are tar pits in the southern basin but not in the Shittim area.

10.  The valley of Siddim may indicate the southern basin was once a fertile plain which was first burned, then flooded with six meters of water. 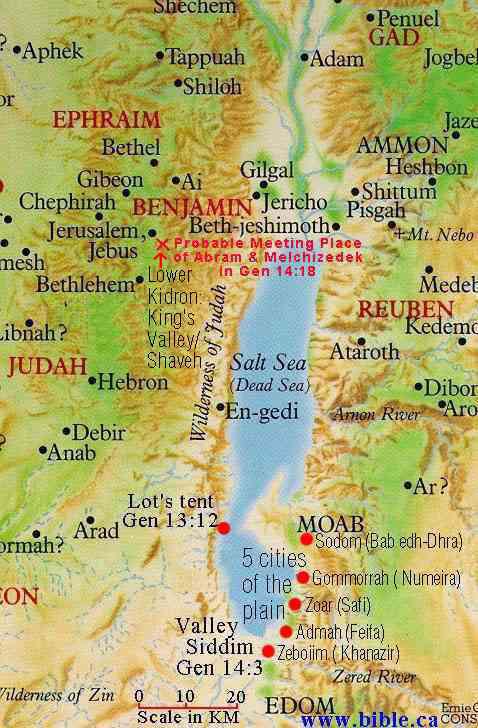 First Melchizedek, as the first king of Jerusalem.

Fourth, Jesus sits on the throne of David (and Melchizedek) at the ascension. Acts 2:29-36.Then it comes full circle, because Jesus was a king and priest after the order of Melchizedek. (Heb. 7:4-10)

First is Melchizedek whose priesthood preceded Aaron's; whose kingship preceded David's; who blessed and received tithes from Abram. Gen 14:19 (Heb 4)

Second is Abraham, who was justified by faith before circumcision. Gen. 15:6 (Rom 4)

Third is Moses who wrote the Law's "self destruct clause" in Deut 18:15, (Acts 3:22; 7:37) that stated the Jews should ignore the Law of Moses and give exclusive heed to Christ.