Chronological Flood chart mapping the variants between the LXX and MT: 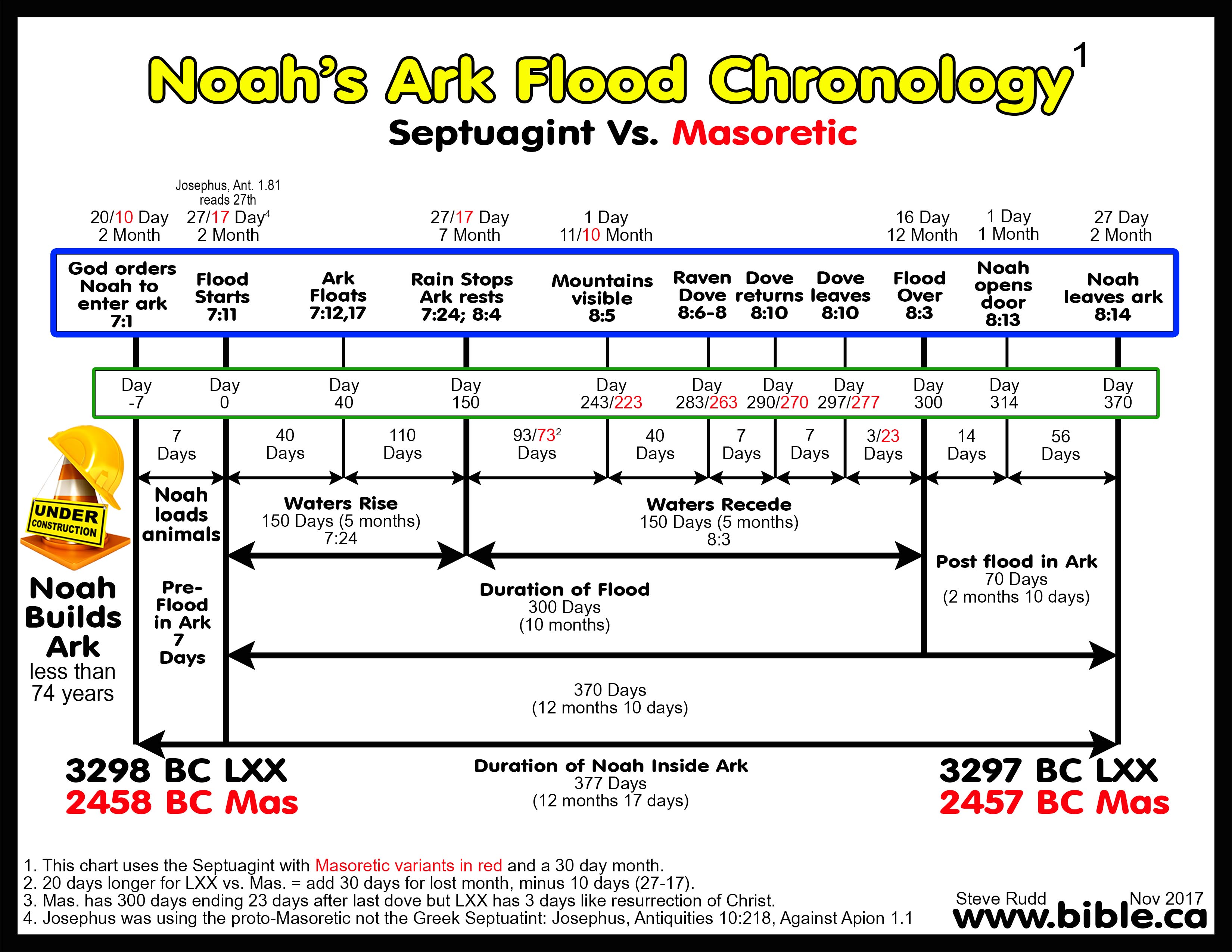 Chronology of Noah’s Flood: Single Textual Variants in the Book of Genesis

1.      The variants in the Genesis flood Chronology are the result of a calculated and coordinated nefarious plan to alter the text and not some innocent scribal error.

a.       The three changes from the LXX to the MT cannot be explained by scribal errors because in both cases the 150 + 150 day sequences are identical in length.

b.      It is impossible for three random scribal errors to balance themselves out as we see they do.

a.       The best guess is that this change was theologically motivated by the Jews around 150 AD to break any possible synchronism or type of Christ, it involves moving away from 27 to 17 in two places and changes 3 days (Jesus was raised the 3rd day) to 23.

b.      Remember, the Jews also shortened all the chronology numbers in Gen 5,11 which resulted in a reduction of the age of the earth from 5554 BC down to 4174 BC. That’s a whopping 1380 year reduction motivated with the purpose of disconnecting Jesus Christ from Messianic prophecy. So these changes in the flood sequence chronology are pigeon feed compared to the changes the Jews made in Gen 5,11.

3.      All known ancient archeological and Literary sources stand against the Masoretic text and validate the Septuagint once again!

a.       No ancient Dead Sea Scroll manuscripts of Genesis chapters 5, 7, 8, 9, 10 or 11 have ever been found. Such manuscripts would help us decide if the changes happened before or after the birth of the church in 33 AD.

b.      It is clear at this point that the Jews made the changes around 160 AD but we do not know specifically how these changes attacked Christianity.

a.       "In the six hundredth year of Noah’s life, in the second month, on the seventeenth day of the month, on the same day all the fountains of the great deep burst open, and the floodgates of the sky were opened." (Genesis 7:11, MT)

b.      "In the six hundredth year in the life of Noah, during the second month, on the twenty-seventh of the month, on this day all the springs of the deeps burst forth, and the waterfalls of the heaven were opened." (Genesis 7:11, LXX)

b.      "The ark ran aground in the seventh month on the twenty-seventh day of the month on the Ararat mountains." (Genesis 8:4, LXX)

1.      Josephus confirms the number 27 as the day the flood started: “Now he says that this flood began on the 27th day of the aforementioned month; and this was 2656 years years from Adam” (Josephus, Antiquities 1.81-82)

2.      Josephus was using a Hebrew Torah not the Septuagint:

a.       What this means, is that the Hebrew Torah in the hands of Josephus in 70 AD was in agreement with the Greek Torah (Septuagint).

b.      It is likely that the alteration was made by the Jews at Zippori in 160 AD when they also corrupted the Genesis 5 & 11 chronologies in their Hebrew Torah.

c.       “But let no one blame me for writing down everything of this nature, as I find it in our ancient books; for as to that matter, I have plainly assured those that think me defective in any such point, or complain of my management, and have told them, in the beginning of this history, that I intended to do no more than translate the Hebrew books into the Greek language, and promised them to explain those facts, without adding anything to them of my own, or taking anything away from them.” (Josephus, Antiquities 10:218)

d.      “I suppose that, by my books of the Antiquities of the Jews, most excellent Epaphroditus, I have made it evident to those who peruse them, that our Jewish nation is of very great antiquity, and had a distinct subsistence of its own originally; as also I have therein declared how we came to inhabit this country wherein we now live. Those Antiquities contain the history of five thousand years, and are taken out of our sacred books; but are translated by me into the Greek tongue.” (Josephus, Against Apion 1.1)

2.      The Septuagint has a triplet synchronism lost in the Masoretic since LXX says the flood starts, stops and Noah leaves the ark on the 27th day in all three cases. This change maintains the second 150 day period from when the waters stopped and the ark came to rest (Gen 7:24; 8:4) and the end of the flood at day 300 (Gen 8:3).

4.      Once we realize that Josephus was using a Hebrew text in 70 AD that used the 27th day for the start of the flood, it becomes clear that the number was changed at a later date by the Jews in their own Hebrew text in 160 AD.

>In the final analysis, we can be certain that we possess the word of God!

This is what Jesus meant, when He said: "Scripture cannot be broken" (Jesus, John 10:35)

"My word will accomplish what I desire and succeed in the purpose for which I sent it." (Isa 55:11)