300 BC: The Death of Hebrew Language

Rise of the Greek Septuagint LXX

The extinction of the Hebrew language in 300 BC of the world population of Jews created a spiritual vacuum and the need for a Greek version of the Hebrew scriptures. The Septuagint filled this spiritual void for the tiny group of hungry remnant of Jews who began reading the Torah in Alexandria Egypt in their homes in small groups and the synagogue was born. Everywhere the Greek Septuagint was distributed throughout the world as synagogue was born. At the time of Jesus the Messiah/branch, son of David, Hebrew had already been a dead language for 300 years. The tiny remnant who spoke Hebrew were the Jerusalem Temple elites that included the High priest and his associates (Sadducees) but all these were wiped out in 70 AD. A small remnant of Hebrew speaking Jews lived at Zippori and Tiberias who became known to us as the Masoretes, but these went extinct in 1000 AD. After 1000 AD nobody on earth spoke Hebrew until it was restored in 1915 AD in Tel Aviv. From Abraham to the present time, the Hebrew people have spoken four languages: Hebrew, Aramaic, Greek, Germain (Yiddish). Historically, there were three failed attempts to restore Paleo-Hebrew alphabet script as the common spoken and written language of the Jews. Jewish leaders vainly attempted to restore and revive this ancient alphabet in the inscriptions on their coinage at a time when the general population spoke Aramaic and Greek. It is wrong to interpret the paleo-Hebrew on these coins as proof that the general population spoke and wrote in Paleo-Hebrew at that time. The use of the long extinct Hebrew script (550 BC) on the coinage was an act of desperation to reverse the cultural bleed into Hellenism. It was also a utopic political ideology to restore Israel to the state of its last period of independence before 587 BC when the Paleo-Hebrew script was used by the general population. However, the restoration of the long extinct Hebrew language as a working language for an entire population in Israel today, is remarkable being the only example in earth history of a population recapturing their historic language and script. Two unique events in world history can be attributed to the Jews: The invention of the first alphabet and the restoration of Hebrew in Modern Israel after it had been extinct for over 2200 years among the general Jewish population.

1.      The transition from Hebrew to Aramaic to Greek was all part of God’s eternal plan in the Church of Christ

a.       Under Mosaic Judaism, a single temple housed a copy of the Hebrew scriptures (Tanakh)

b.      After 280 BC each of the thousands of Synagogues housed a copy of Greek translation of scriptures (Septuagint/Old Testament)

I. Death and Extinction of Biblical Hebrew as a language:

2.         The paleo-Hebrew script went extinct in shortly after the 587 BC destruction of Solomon’s temple.

c.           The only Jews who spoke Hebrew at the time of Christ were the Temple elites (high priests and the Sadducees) who were wiped out in 70 AD.

4.         The only exception were the Masoretes who were a tiny commune of "Aramaic Hebrew" scribes living in Zippori near Nazareth and Tiberias on the west bank of the Sea of Galilee.

1.       605BC: Aramaic conversion at the time of the Babylonian Captivity of 605 BC: Jews continued to speak Hebrew but became bilingual in also learning Aramaic language. They also applied the Aramaic alphabet to their Hebrew language as discussed herein with the invention of "Aramaic Hebrew" script. The diaspora Jews forgot Hebrew and became fluent in Aramaic whereas those who returned continued to speak Hebrew, but used the Aramaic alphabet to spell hebrew words: “Aramaic Hebrew”.

2.       333 BC: Greek conversion at the time of Alexander the Great: 333 BC. Around 300 BC, all diaspora Jews were mass converted from Aramaic to speak Greek. This gave birth to the Septuagint which translated the Hebrew Torah into Greek. (first five books of Moses). By 200 BC Hebrew as a working language was dead among all Jews living in Judea. Only the high priests in Jerusalem continued to use Hebrew until they were all killed in 70 AD. A small pocket of Hebrew speaking Jews continued at Zippori and Tiberias who became known as the Masoretes who went extinct by 950 AD.

3.       625 AD: Arabic conversion under the Islamic conquest of 642 AD: Mohammad when he converted the language of the entire Middle east from Greek to Arabic. Today Christians and Jews from Egypt to Turkey still speak Arabic.

4.       Yiddish conversion: Twice the Jews changed to the Aramaic alphabet:

a.       Hebrew was a dead language from 100 AD until it was revived in Tel Aviv after World War I (1914 AD) where the "Legion of the Defenders of the Language" forced Hebrew into the schools, workplace and markets with slogans like, "Jew, speak Hebrew".

b.      By the time of Israel national statehood in 1947 AD a sizeable population spoke Hebrew as their native tongue and today Hebrew is again the mother tongue.

a.       The Hasmonean high priest family of the Jewish temple achieved independence from the Seleucid Greek Empire: From 166 to 37 BC the Maccabeans attempted to restore the original Hebrew by using "Mosaic Hebrew" (paleo-Hebrew) on their coins at a time when the native population spoke Aramaic and Greek.

b.      Between 103-78 BC the Alexander Jannaeus minted the famous "Widow's Mite" (Prutah) in a bilingual Greek and Aramaic inscription to meet the needs of the population. Not surprisingly, Widow's Mite became the most widely distributed coin in circulation at the time of the ministry of Jesus.

c.       Of course Jewish independence was crushed by Rome in 63 AD with the recapture of Jerusalem even though the coins continued to be minted until 37 AD.

a.       The very First Jewish War revolt coins were minted at Gamla (where Josephus sought refuge) in 66 AD in both Hebrew and Aramaic. These actions to restore Hebrew on coinage were both symbolic and futile given the fact that Greek was the dominant language in Judea at the time. In 66 AD the Romans captured Gamla and Josephus surrendered. It was at this time he began writing his books. In 69 AD the Maqatir rebels were destroyed by the Romans in a large underground bunker facility as their next stop was Jerusalem which was destroyed in 70AD and finally Masada in 73 AD.

b.      "Zealot" Jews rebelled against Roman rule and attempted to restore independence to Jerusalem. During this time they absurdly minted Mosaic Hebrew coins at a time when everyone spoke Aramaic/Greek. The only ones who spoke Hebrew were the elite priesthood in the Jerusalem temple.

c.       Revolt coins have been excavated at Khirbet el-Maqatir (Ephraim of John 11) and Gamla where the famous Josephus was an active part of the First Jewish War until he surrendered.

a.       Initially the Jews thought that Simon Bar Kokhba (son of light) was the messiah but after the Second rebellion was crushed, the Jews realized he was not the messiah and renamed him Simon Bar Koziba (Son of Lie).

b.      This tiny remnant of Jews made one last attempt to restore the tiny remaining Greek and Aramaic speaking Jewish population to the same language spoken by Moses by once again using the long extinct Mosaic Hebrew on their coins.

c.       These second Jewish War coins have also been excavated from the underground bunker system by the author at Khirbet el-Maqatir (2013 AD).

d.      In 135 AD, Emperor Hadrian slaughtered large numbers of Jews, renamed the Judea "Philistina" (Philistines, Palestine). He also altered the size and elevation of the temple mount platform so it was unrecognizable then built a temple of Jupiter on it. What you see today is not the same temple platform Jesus and the apostles saw. Finally in an effort to wipe out any trace of Jewishness, he renamed Jerusalem Aelia Capitolina (City of Jupiter).

1.         The extinction of Hebrew in 300 BC of the world population of Jews created a spiritual vacuum and the need for a Greek version of the Hebrew scriptures: The Septuagint filled this spiritual void to a hungry remnant of Jews.

a.           The General population in Judea at the time of Christ spoke Aramaic and Greek but were illiterate in Hebrew.

b.          Each synagogue had a copy of the Greek Tanakh as their standard pulpit bible.

b.          The restoration of Hebrew in Modern Israel in 1915 AD, after it had been extinct for over 2200 years among the general Jewish population.

3.         These mass language conversions prepared God’s people providentially for the good news of Jesus Christ and conversion to Christianity.

c.           God providentially put the Septuagint in every one of the thousands of synagogues 150 years before the birth of Christ, each of which had a full immersion baptistry (Mikveh) ready to create Christians!!! Can you see the Jewish synagogue baptistry in the archeological top plan below? 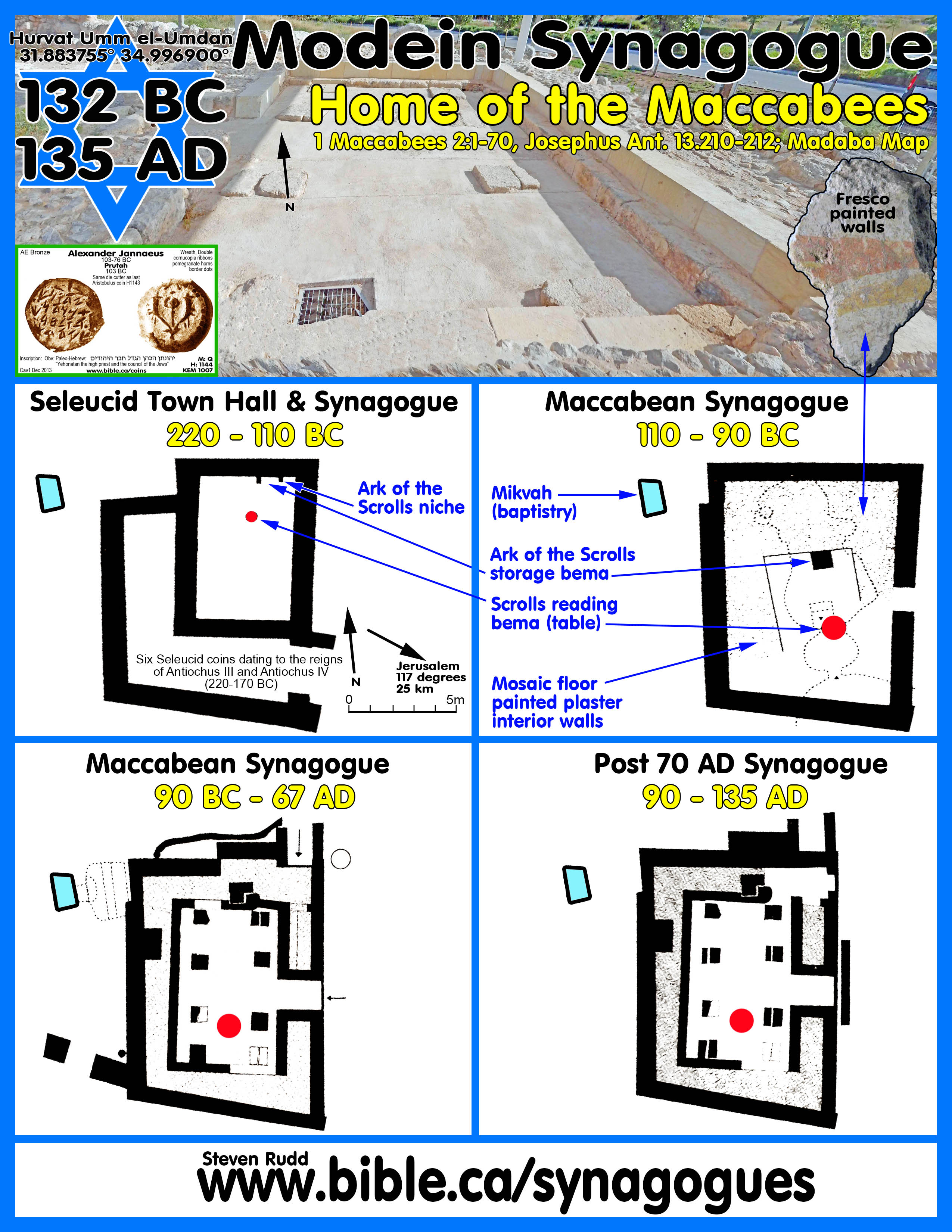 d.          God providentially provided for a full immersion baptistry known as a Mikveh, beside each synagogue. 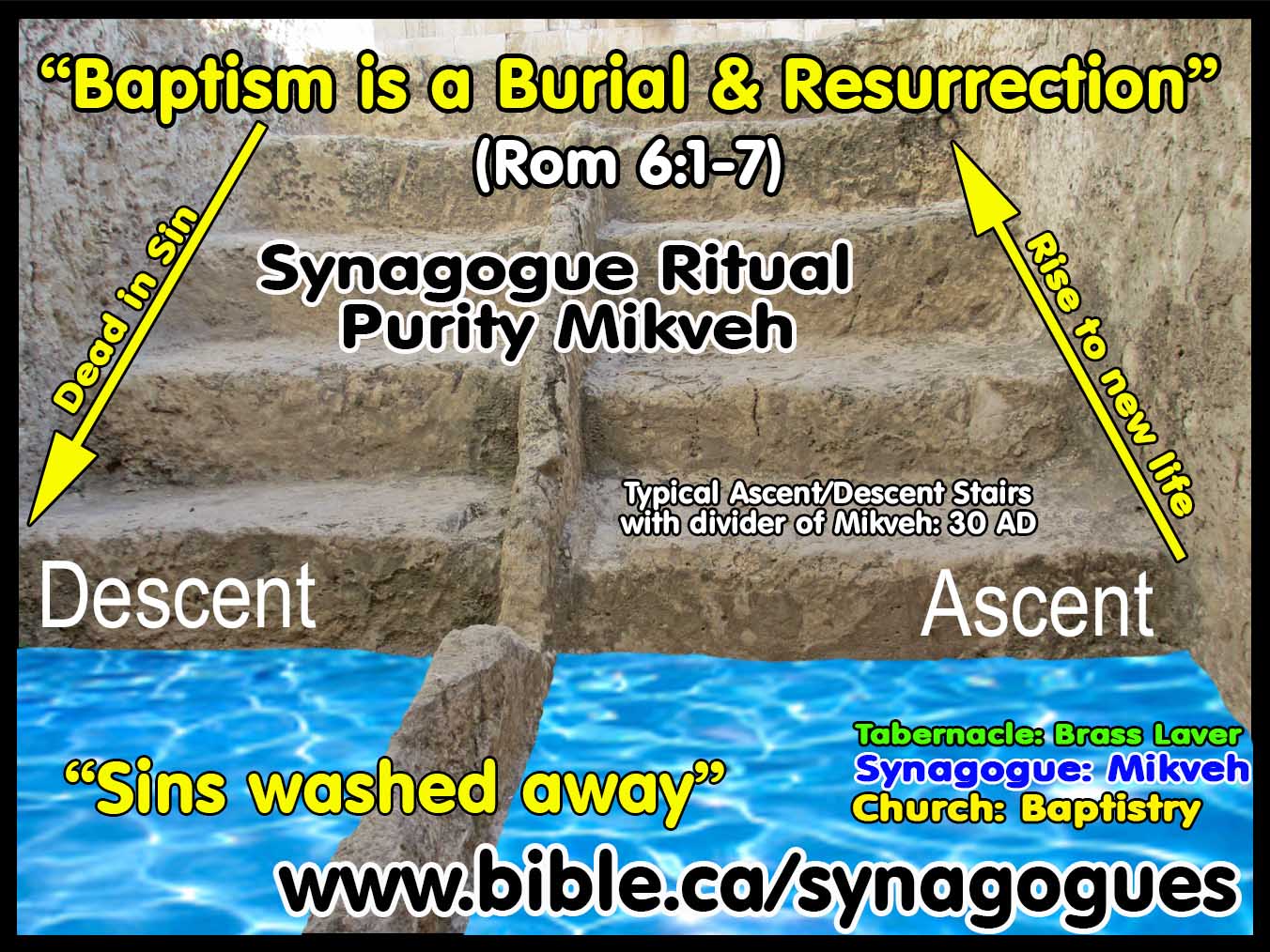