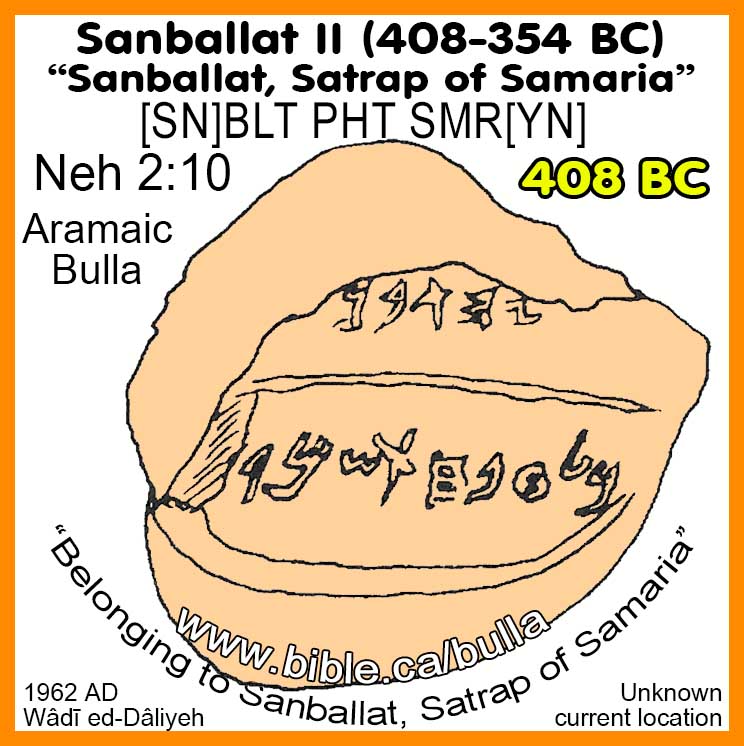 1.      Wadi Daliyeh is located 16 km north of Jericho and 8 km NW of Archelaus in the hills of the western bank of the Jordan.

2.      It is one of the most important sites in Israel to archeologically document the Persian period of Judea up to the advent of Alexander the Great in 333 BC.

3.      Sanballat II, the son/grandson of the biblical Sanballat (445 BC) who classed with Nehemiah is named on a bulla and in one of the Aramaic documents discovered in the cave.

4.      Sanballat I lived at the same time as Tobiah who built a palace seen today at modern Qasr al Abd in Jordan.

5.      Sanballat I also is named in the Elephantine Papyri:

a.         See full outline on Elephantine papyri and Sanballat

b.        Sanballat I is named as the governor of Samaria in the Aramaic Papyrus:

I. Bible verses that mention Sanballat:

1.       "When Sanballat the Horonite and Tobiah the Ammonite official heard about it, it was very displeasing to them that someone had come to seek the welfare of the sons of Israel." (Nehemiah 2:10)

2.      "But when Sanballat the Horonite and Tobiah the Ammonite official, and Geshem the Arab heard it, they mocked us and despised us and said, “What is this thing you are doing? Are you rebelling against the king?”" (Nehemiah 2:19)

3.      "Now it came about that when Sanballat heard that we were rebuilding the wall, he became furious and very angry and mocked the Jews." (Nehemiah 4:1)

4.      "Now when Sanballat, Tobiah, the Arabs, the Ammonites and the Ashdodites heard that the repair of the walls of Jerusalem went on, and that the breaches began to be closed, they were very angry." (Nehemiah 4:7)

5.      "Now when it was reported to Sanballat, Tobiah, to Geshem the Arab and to the rest of our enemies that I had rebuilt the wall, and that no breach remained in it, although at that time I had not set up the doors in the gates, then Sanballat and Geshem sent a message to me, saying, “Come, let us meet together at Chephirim in the plain of Ono.” But they were planning to harm me." (Nehemiah 6:1–2)

6.      "Then Sanballat sent his servant to me in the same manner a fifth time with an open letter in his hand." (Nehemiah 6:5)

7.      "Then I perceived that surely God had not sent him, but he uttered his prophecy against me because Tobiah and Sanballat had hired him." (Nehemiah 6:12)

8.      "Remember, O my God, Tobiah and Sanballat according to these works of theirs, and also Noadiah the prophetess and the rest of the prophets who were trying to frighten me." (Nehemiah 6:14)

1.                  Wadi Daliyeh (Cave of Abu Shinjeh; WD) – Discovered by Bedouin in 1962. A cache of 40 Aramaic papyrus fragments, inscribed seals and coins, and the skeletal remains of 205 people were discovered in this cave, approximately 14 km north of Jericho. These ancient papyri are Samaritan legal documents from the Persian period (4th century bce), mostly deeds of sale for slaves. The owners of the documents were wealthy Samaritans who fled Samaria after the invasion of Alexander the Great in 333 bce, but were likely assassinated by Alexander's troops. (Dead Sea Scrolls website, Israel)

2.                  “The most important collection of Aramaic documents from the Persian period is that of the Jewish military colony at Yeb (Elephantine). Similar legal documents were found recently at Wadi Daliyeh, east of Samaria; they belonged to the Samaritan governor’s family, who had fled from the Macedonian conqueror but were intercepted and died in a cave at Wadi Daliyeh. The earliest document of this group is of 375 bc and the latest of 335 bc.” (The Archaeological Encyclopedia of the Holy Land, Inscriptions, 1990 AD)

3.                  “The finds in Cave 1 in the Wâdī ed-Dâliyeh furnish welcome light on a little-known era in Palestine. The papyri are the first substantial discovery of legal documents from the soil of Palestine. They provide a sample of late 4th-century Aramaic and of its legal formulas and usages, and they reveal substantial differences from the legal formularies in use in the Aramaic papyri from Jewish sources in 5th-century Egypt. Of special interest, too, are the sealings from the papyri. The bullae preserve the impressions of exquisite signets, many showing scenes from Greek mythology, some engraved with motifs familiar from Achaemenid Persia, one inscribed with the name of Sanballat II, governor of Samaria, a hitherto unknown figure, presumably the grandson of biblical Sanballat, adversary of Nehemiah in the late 5th century. The penetration of Greek art motifs in pre-Alexandrian times in glyptic is surprising but adds to a growing accumulation of data for extensive Greek influence in Syria-Palestine before the advent of Alexander.” (ABD, Wadi Ed-Daliyeh)

4.                  “SANBALLAT san-bal´at [סַנְבַּלַּט sanballat; Σαναβαλλάτ Sanaballat]. Three governors of SAMARIA during the Persian period bear the name Sanballat. The origin of “Sanballat” is an Akkadian theophoric name: Sin-uballit, meaning “Sin (the moon deity) has given life.” 1. Sanballat I was governor of Samaria (ca. 445–408 BCE) and one of the bitter opponents of NEHEMIAH. He, together with Tobiah the Ammonite and Geshem the Arabian, opposed Nehemiah’s rebuilding of the walls of Jerusalem (445 BCE) and his other activities in Judah (Neh 2:10, 19; 4:1, 7; 6:1–2, 5, 12, 14; 13:28). Sanballat’s designation “the Horonite” (hakhoroni הַחֹרֹנִי) refers to his family’s earlier place of residence. Most likely it was in Upper or Lower Beth-horon in Ephraim (Josh 16:3, 5; ca. 10 km north of Jerusalem). However, some suggest that it may refer to Horonaim in south Moab (Isa 15:5; Jer 48:3; if so, then Sanballat was a Moabite, just as Tobiah was an Ammonite). Others change the Hebrew vocalization of hahoroni to haharani (“the Haranite”), related to the Mesopotamian city Harran—a center for the worship of the moon-god Sin—the theophoric element of the name Sanballat. Presumably Sanballat was a descendant of the Mesopotamians exiled to Samaria by the Assyrian king Sargon II (721–705 BCE) after the collapse of the Northern Kingdom (720 BCE; 2 Kgs 17:24–41; Ezra 4:2, 10). That Josephus says Sanballat was of the Cuthaean race (Ant. 11.302–303) points also in this direction (even though Josephus has mistaken Sanballat III for this Sanballat; see below). However, Sanballat had already adopted Yahweh’s worship. He named his sons “Delaiah” and “Shelemiah”—proper theophoric-Yahwistic names, and his daughter married the brother of the high priest in Jerusalem (Neh 13:28). Sanballat is also mentioned once in a papyrus from Elephantine (Upper Egypt), from the fourteenth year of King Darius II (Ochus) of Persia (ca. 408 BCE; see ELEPHANTINE PAPYRI). In their petition for authorization to rebuild the temple of Yaho, the Jews of Elephantine tell Bagoaz, the Persian governor of Judah, that they have written about the matter in a letter to Delaiah and Shelemiah, the sons of Sanballat the governor of Samaria (ANET, 492b). The letter testifies that his name and influence were well-known far beyond Samaria and the land of Israel. The name “Sanballat” appears also on the papyri and on a bulla that were unearthed in a cave of Wadi ed Daliyeh (Jordan Valley, 9 mi. [ca. 14 km] north of Jericho; see DALIYEH, WADI ED). The earliest material from the cave is from 375 BCE, while the latest is from 335 BCE. This material indicates that there were two additional governors of Samaria that held the name “Sanballat.” 2. Sanballat II presumably was the son of Delaiah and grandson of Sanballat I, who governed in Samaria before 354 BCE. 3. Sanballat III, grandson of Sanballat II and probably the son of Hananiah, was the governor of Samaria at the time of the last Persian Achaemenid king, Darius III (Codomannus; 336–332 BCE), and Alexander the Great. Accordingly, Josephus’ story that links “Sanballat” with the erection of the Samaritan temple on Mount Gerizim that was permitted by Alexander the Great (332 BCE; Ant. 11.302–11, 321–25, 340–46) refers to Sanballat III (though Josephus confused him with Sanballat I of Neh 13:28)” (The New Interpreter’s Dictionary of the Bible, Sanballat, 2009 AD)