a.       "When the wine ran out, the mother of Jesus said to Him, “They have no wine.” And Jesus said to her, “Woman, what does that have to do with us? My hour has not yet come.” His mother said to the servants, “Whatever He says to you, do it.” Now there were six stone waterpots set there for the Jewish custom of purification, containing twenty or thirty gallons each. Jesus said to them, “Fill the waterpots with water.” So they filled them up to the brim. And He said to them, “Draw some out now and take it to the headwaiter.” So they took it to him." (John 2:3–8)

2.                 “Around 100 B.C. a major shift occurred in Late Second Temple period Judaism. Pious Jews interpreted Leviticus 11 and 15 literally and began to replace pottery with chalk stone vessels which they viewed as insusceptible to ritual impurity. What started as a small wave grew into a tsunami affecting burial, bathing, and cooking. Both the material cultural remains and the text of the New Testament bear witness to these changes.” (Dr. Scott Stripling)

3.                 Stoneware is unique to the first century and was used for ritual purity by the Jews. Standard pottery could not be reused and had to be broken after sacred use. Stoneware, the Pharisees reasoned, could be reused. Pottery is made from formed and fired clay. Stoneware is a cup or storage pot carved out of a single chunk of stone and there very expensive until you factor in that it could be reused.

5.                 Stoneware was in use for a short period of time, it is highly diagnostic in archeological excavations in dating a locus of a dig square or even the entire site.

1.              "So from that day on they planned together to kill Him. Therefore Jesus no longer continued to walk publicly among the Jews, but went away from there to the country near the wilderness, into a city called Ephraim; and there He stayed with the disciples. Now the Passover of the Jews was near, and many went up to Jerusalem out of the country before the Passover to purify themselves." (John 11:53–55)

a.       The largest amount of ritual stoneware ever excavated from one site in Israel is at Khirbet el-Maqatir, first century Maqatir where Jesus withdrew to after healing Lazarus in John 11.

b.      This was right before Passover and Jesus would have stayed as a city where he could be ritually pure.

a.       Over 100 different fragments including a wash basin and a whole stone was excavated at Ephraim.

b.      Ephraim (Maqatir) fits all the requirements of ritual purity that Jesus would have been concerned about as a first century Jew.

b.      The timing of Passover and concern for ritual purity mentioned in the passage fits Maqatir with its stoneware and many mikvoat.

c.       It is reasonable guess that Jesus would have used stoneware for the last supper since it was considered the most holy and sacred dinnerware of the period AND He had used it at Maqatir (Ephraim) just days earlier.

I. How Stoneware Vessels are made

a.         Stoneware was quarried in at least two known locations just outside Jerusalem.

c.         The quarries are littered with thousands of worthless rock chips in the manufacture of stone vessels with hand chisels.

c.         Here is a core cup the author excavated from the City of David excavation in 2008 AD. Sandy Richard and Mckinny were the actual couple who discovered it!

II. The communion cups used at the last supper of Jesus and his disciples?

b.        We actually have no idea what Jesus used at the last supper.

c.         Steven Rudd made an educated guess based upon the latest research in Biblical archeology.

a.         Though speculative, it is likely that the 12 communion cups at the last supper were smaller than Jesus cup.

c.         There are several stoneware vessel cup forms that are excellent candidates for this smaller cup.

d.        We propose that the “core cup” was the actual form of stone vessel used by Jesus at the last supper:

i.      Cores are usually discarded at the quarry where the cups were made.

iii.      Jesus chose the “CORE CUP” because it metaphorically represented the apostles who, like the core, discarded as worthless, a type of “the stone the builders rejected”.

iv.      The cores were “rejected stones” like Jesus, but occasionally they would be made into a useful cup.

v.      Cores were also rare, showing metaphorically how very special the apostles were.

vi.      Speculative yes, but it does make perfect sense and it fits with the story and known first century ritual purity concerns that Jesus certainly would have conformed with.

a.         We know there were 13 cups (as opposed to one) because Jesus told the disciples to pour a little grape juice from His cut into each of their own individual cups.

b.        How silly and unbiblical are those who will not partake of the Lord’s Supper with more than one cup and refuse to have fellowship with Christians who follow the actual example of Jesus by using multiple cups.

d.        Without multiple cups, no juice was poured and the metaphor doesn’t work. 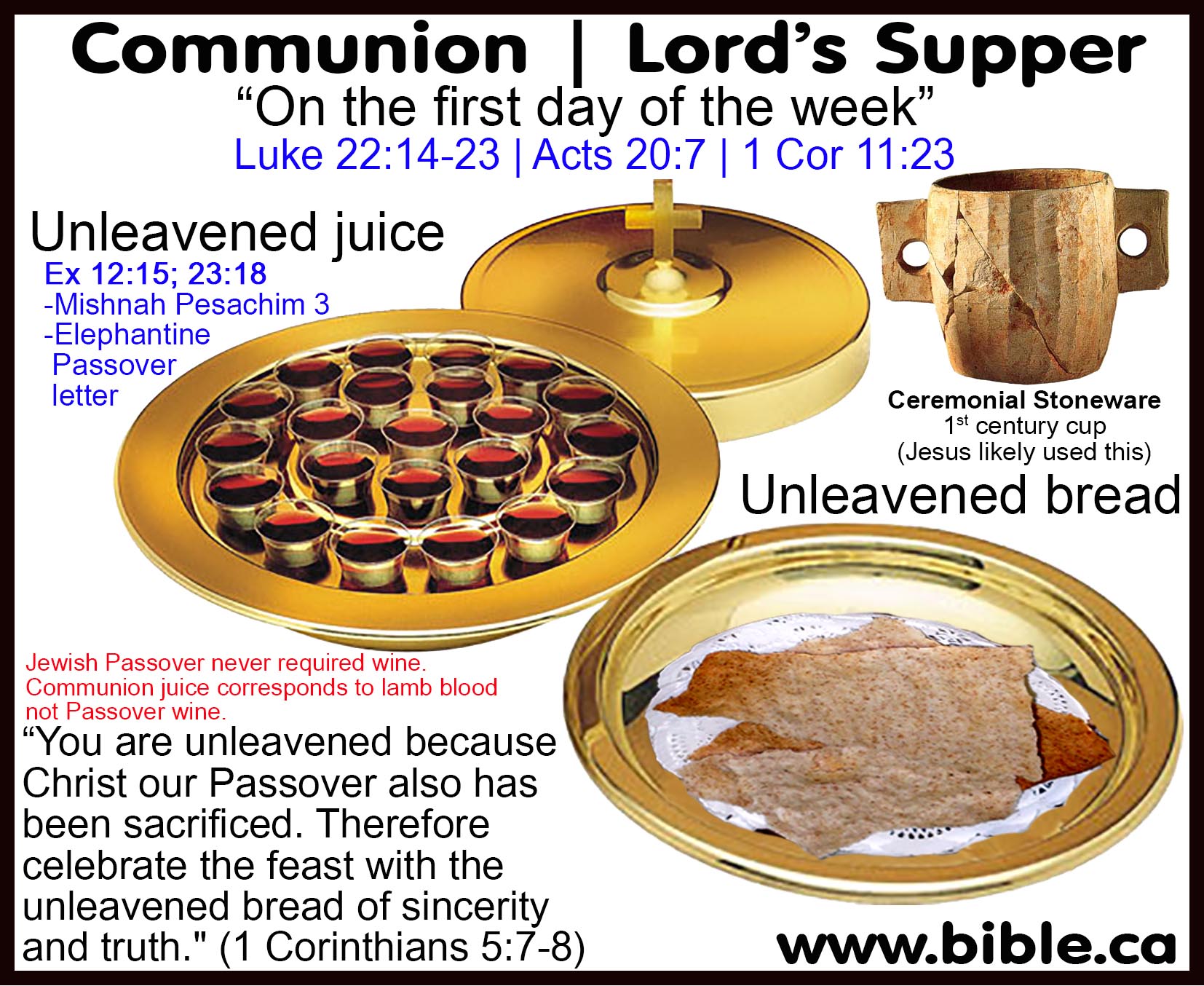 a.       We actually have no idea what Jesus used at the last supper.

b.       Steven Rudd made an educated guess based upon the latest research in Biblical archeology.

a.       It was found in about 20 fragments in Cav1 and each piece was recorded three dimensionally by Square Supervisor Abigail Leavitt who also fitted the pieces together.

b.       The fragments were taken to Orna Cohen who restored the entire vessels to its present museum standard condition.

c.       The author is seen transporting the stoneware ritual purity washbasin from Orna Cohen’s studio back to the excavation headquarters where it was delivered to the IAA to be used as a model show piece at the Israel Museum.

IV. Miracle at Cana and the six stone water pots:

a.       "On the third day there was a wedding in Cana of Galilee, and the mother of Jesus was there; and both Jesus and His disciples were invited to the wedding. When the wine ran out, the mother of Jesus said to Him, “They have no wine.” And Jesus said to her, “Woman, what does that have to do with us? My hour has not yet come.” His mother said to the servants, “Whatever He says to you, do it.” Now there were six stone waterpots [Greek: hydria] set there for the Jewish custom of purification, containing twenty or thirty gallons each. Jesus said to them, “Fill the waterpots with water.” So they filled them up to the brim. And He said to them, “Draw some out now and take it to the headwaiter.” So they took it to him. When the headwaiter tasted the water which had become wine, and did not know where it came from (but the servants who had drawn the water knew), the headwaiter called the bridegroom, and said to him, “Every man serves the good wine first, and when the people have drunk freely, then he serves the poorer wine; but you have kept the good wine until now.” This beginning of His signs Jesus did in Cana of Galilee, and manifested His glory, and His disciples believed in Him. After this He went down to Capernaum, He and His mother and His brothers and His disciples; and they stayed there a few days." (John 2:1–12) 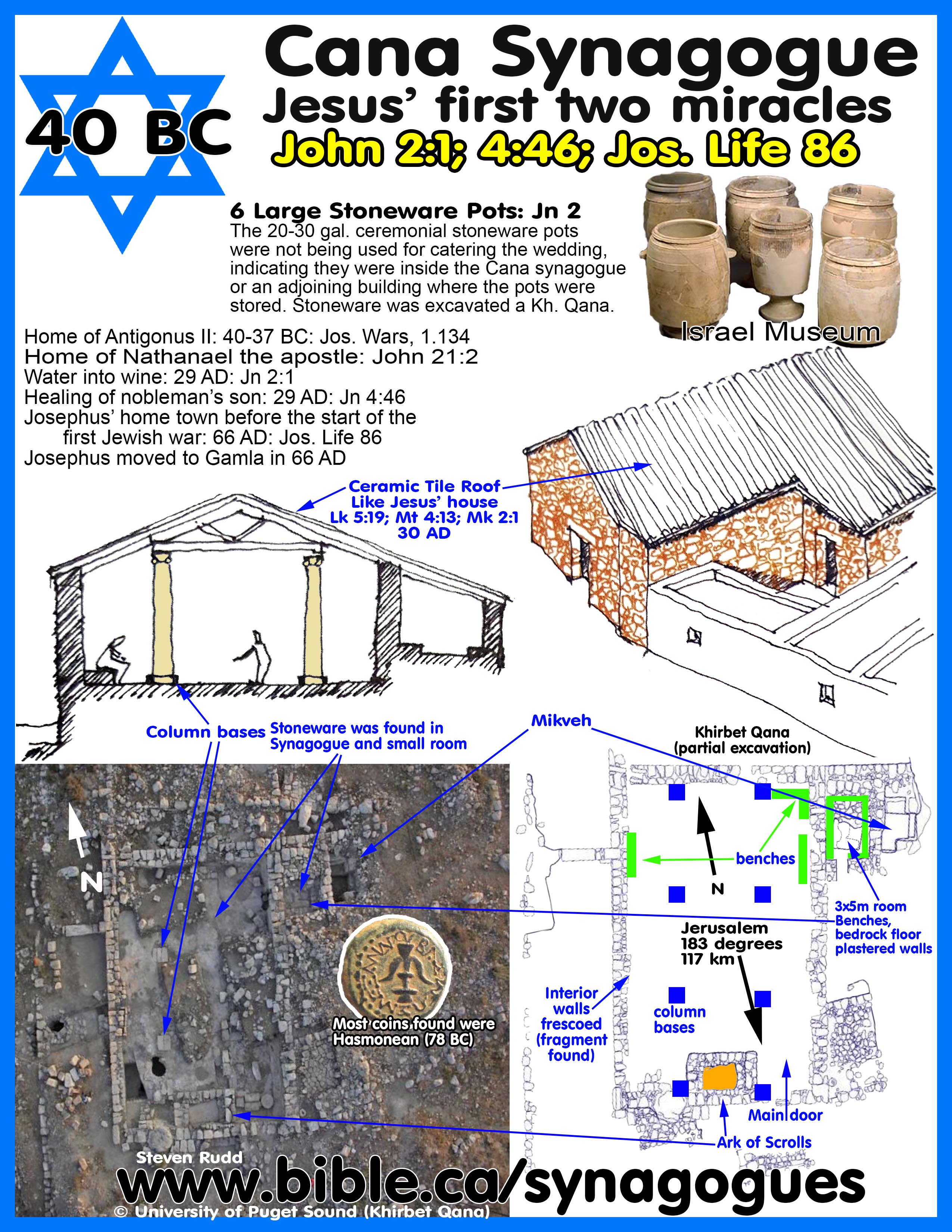 4.         Most noteworthy is the 6 unused stoneware pots used for the miracle of the water into wine. It is most likely that the wedding took place in one of the adjoining buildings as part of the Synagogue complex. Why would six huge and very expensive stoneware pots be there in the first place and why were they not being used in the wedding catering? The answer is likely that they were in an adjoining storage room of the synagogue near the banquet hall.

a.       He is known chiefly for his involvement in the arrest of Jesus as described in the New Testament.

b.      "Then those who had seized Jesus led him to Caiaphas the high priest, who the sates and the elders had gathered." (Matthew 26:57)

b.      The full name of the deceased - "Joseph son of Caiaphas" appears twice.

c.       The name and the chest's elaborate decorations suggest that this was indeed the ossuary of the Caiaphas from the New Testament.

VI. The stone bathtub of Herod the Great from Herodium:

a.       The long sought after tomb of Herod hidden in the side of the hill.

b.      Elaborate rooms with colour frescos 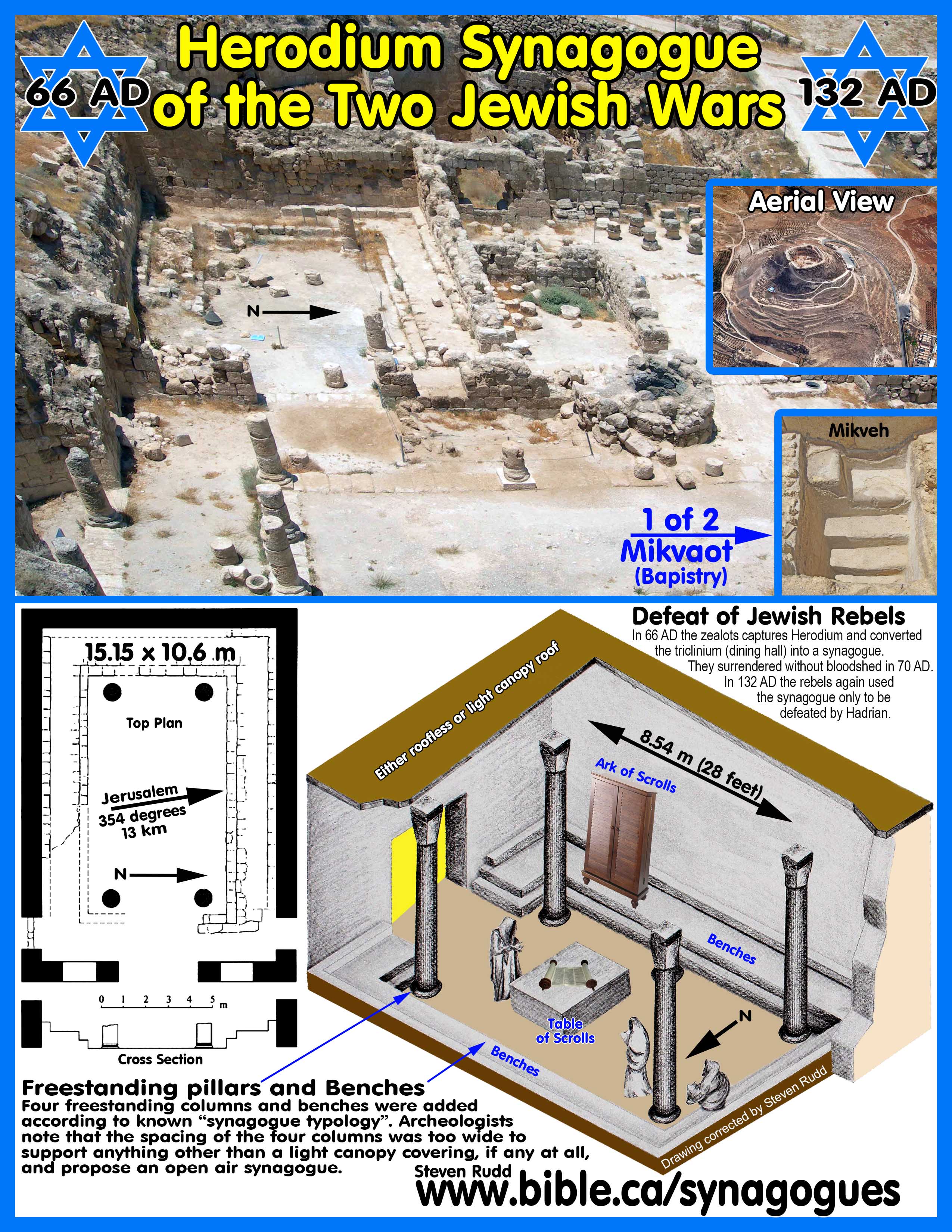 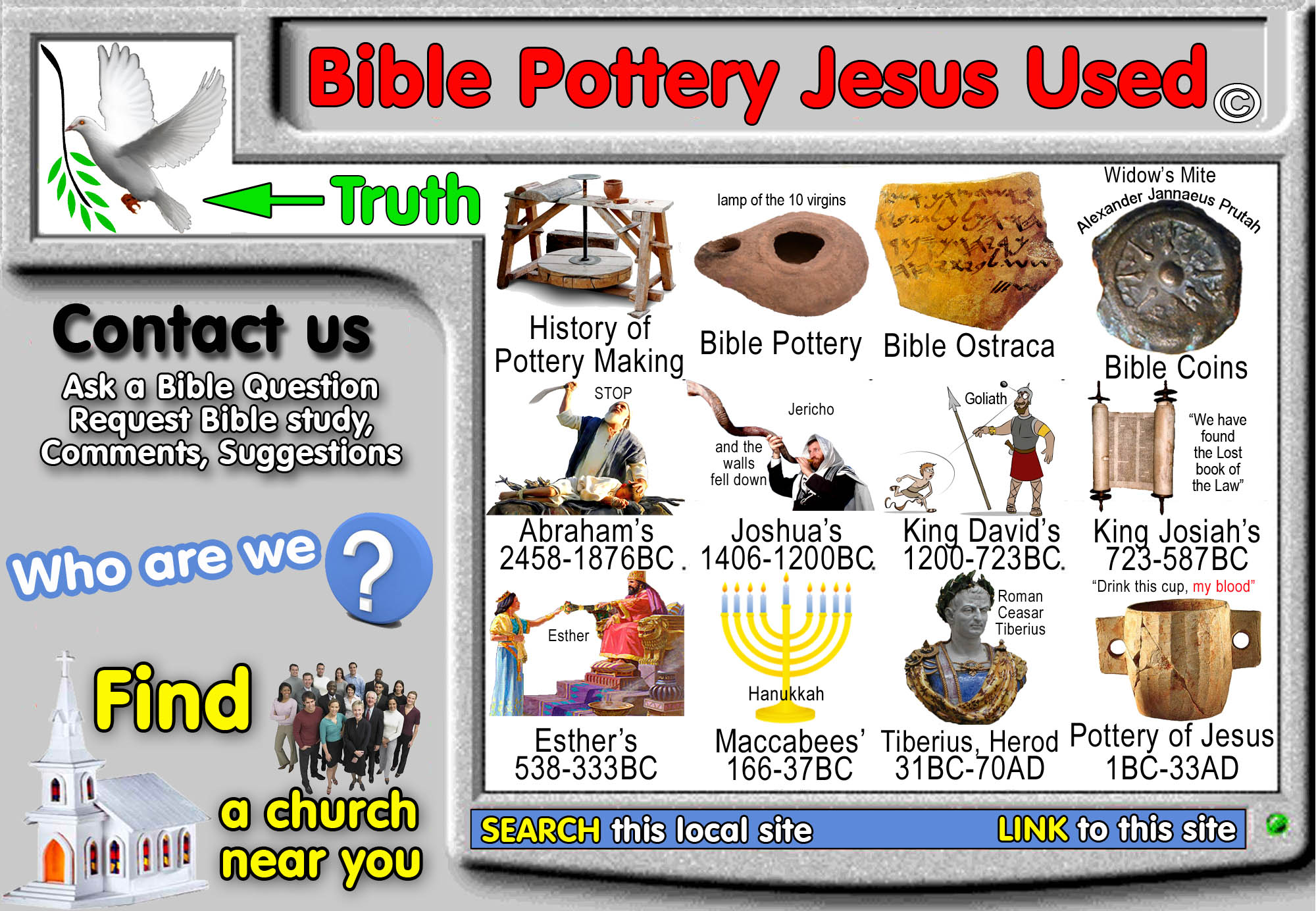