Herbert W. Armstrong claimed to be a prophet, an apostle and the "Elijah who was to come". In fact he was a deluded false teacher claiming direct revelation from God when God had not spoken to him. Ronald Weinland, is Armstrong's successor of splinter group called, Church of God, Preparing for the Kingdom of God (CG-PKG). Like Armstrong he claimed to be a prophet, one of the two witnesses of Revelation, a Apostle and Elijah to come. With Ronald Weinlands failed predicting of the end of the world in 2008, the future of Armstrongism looks bleak. "If it doesn't come to pass...starting in April, 2008, then I'm nothing but a false prophet ... (Ronald Weinland, 2008 - God's Final Witness, Church of God) Even worse since Ronald Weinland has refused to give up his date setting and had set a second failed date of May 27, 2012.

1.      British Israelism promotes the false concept that the British people and most of Canada and the USA are the ten lost tribes of Israel that went into Assyrian captivity in 722 BC.

3.      Richard Brothers (Canadian) is the true founder of the movement when he wrote: A Revealed Knowledge of the Prophecies and Times in 1794 AD. His prediction for the end of the world which failed.

6.      Herbert W. Armstrong founded the Plain Truth magazine and the Church of God. They teach extinction, annihilation, Sabbatarians, premillennialists, date setters and uniquely Twinitarians in that they believe both the father and the son are God, but believe the Holy Spirit is electricity like the Jw's.

A.    Historical origins of British-Israelism:

1.      British-Israelism was first hinted at by the British Member of Parliament, John Sadler, in his Rights of the Kingdom (1649). But the movement began in the eighteenth century after the self-styled 'Nephew of the Almighty', Richard Brothers, published his book A Revealed Knowledge of the Prophecies and Times (1794). Brothers was, as one source puts it, "a Canadian madman". He became troubled by visions, and said that the British parliament was the 'beast' of Revelation. Brothers believed he was a descendant of King David, and that only he had the right to be king of England. Unfortunately for him, King George III disagreed. The Cambridge Biographical Enyclopedia (1994) says:

2.      Brothers, Richard (1757-1824) British religious fanatic and ex-naval officer, born in Newfoundland, Canada. He announced himself in 1793 as the 'nephew of the Almighty', apostle of a new religion, the Anglo-Israelites. In 1795, for prophesying the destruction of the monarchy, he was sent to Newcastle and subsequently to an asylum from 1795-1806. Despite this, and the failure of his prophecy that Jerusalem would be restored to the Hebrews in 1798, his movement flourished. By the end of the nineteenth century, there were said to number two million adherents of British-Israelism, most of them Church of England members.

3.      In 1859, John Taylor of London expanded the theory into the field of Pyramidology. In the book The Great Pyramid, Why Was It Built and Who Built It? John Taylor tried to show how Israelites built the Pyramid of Cheops, and how British Inches and measurements could be found in its design.

4.      In 1950 this outrageous doctrine was promoted by Herbert W. Armstrong who founded the World Wide Church of God and Plain Truth Magazine.

5.      After Armstrong died, his successor Joseph Tkach rejected as heresy most of Armstrongs doctrines in 1998 AD. This brought about a great split in the church that produced countless little splinter churches each following a different combination of Armstrong's theology.

6.       A key error in Armstrong and all his splinter groups, is failure to accept the clear Bible passages that Israel got all the land promised to Abraham. See Land Promise to Abraham fulfilled

7.      Ronald Weinland, is the creator of an Armstrong splinter group called, Church of God, Preparing for the Kingdom of God (CG-PKG). With Armstrong splinter leader Ronald Weinland's failed predicting of the end of the world in 2008, the future of Armstrongism looks bleak. Ronald Weinland, 2008 - God's Final Witness, Church of God (Armstrong splinter group) When his prophecies failed, he revised his timeline he stated Christ's will now return on May 27, 2012 and that the tribulation began on September 20, 2009. Today, Weinland calls himself an apostle a prophet, the "Elijah who is to come" and one of the two witnesses of Revelation... his wife being the other witness. 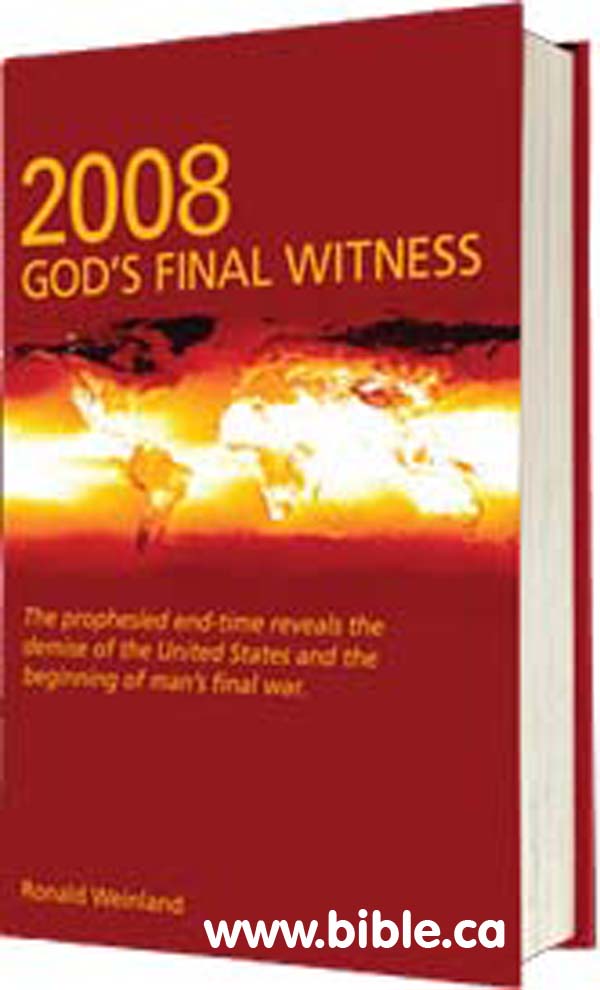 2.      Joseph Tkach, Jr.'s replaced Armstrong as head of WCG after he died said: "From an ethical point of view: It is a well known fact that Mr. Armstrong did not originate this teaching. In fact, earlier editions of the US & BC plagiarized vast portions of a book entitled, "Judah's Sceptre and Joseph's Birthright." It is not possible to say that this was revealed to Mr. Armstrong, when in fact, we can see where he copied it from  -- including the historical errors." ... "Now, my opinion is that this is an interesting episode in history that needs to be pursued. And, that is what we are doing, but it will take time. It should not stay at the high level of doctrine until we can find proof. This is especially important if it is to remain the central plank in our view of prophecy." (to WCG regional pastor Mike Swagerty, August 10, 1992)

3.      Canadian British Israel Association said: "Mr. Armstrong did use the book, "Judah's Sceptre and Joseph's Birthright" as the basis for his identity information and he spent some time at our London headquarters with Mr. Harold Stough the then secretary.... The Tkach people have very recently been at London headquarters again but I was told [the London group] were quite reticent and cautious about dealing with them, realizing I gather they are a different breed of cat, as the saying goes." (President Hubbell responds to a letter regarding the WCG's involvement with the Canadian British Israel Association, August 9, 1991)

4.      William F. Dankenbring, Armstrong splinter group leader of Triumph Ministries said: "Let's get serious! Did Herbert restore the truth of the identity of "Israel"? But the British-Israel society restored that truth, and Herbert Armstrong simply borrowed it from them without giving them due credit! Most of his booklet on "The United States and British Commonwealth in Prophecy" was actually copied, word for word, from the book Judah's Scepter and Joseph's Birthright, by J. H. Allen (Destiny Publishers, Merrimac, Mass. 01860, c.1917). The booklet "Was Time Lost?" which bore Herbert's name was actually written years before he became a Sabbath keeper, by a member of the Church of God Seventh Day!"

5.      Examples of Armstrong's Plagiarism: A tiny fraction of excerpts

Refutation of the most obvious things

There are so many wild, ridiculous and unbiblical things in Armstrong's book, but we have chosen a collection of the most obvious and glaring problems. These should be enough for any honest Bible student to Utterly reject British/Anglo Israelism. A detailed refutation of the entire system is at: click here

2.      There is no scriptural foundation for British Israelism.

3.      Herbert W. Armstrong claimed to be a prophet, an apostle and the "Elijah who was to come". In fact he was a deluded false teacher claiming direct revelation from God when God had not spoken to him.

4.      Ronald Weinland, is the creator of an Armstrong splinter group called, Church of God, Preparing for the Kingdom of God (CG-PKG). With Ronald Weinlands failed predicting of the end of the world in 2008, the future of Armstrongism looks bleak.