Midrashic Dual prophecy of 2 Samuel 7:12-15 as a template to decode the Olivet Discourse:

2.             Strictly within 2 Sam 7 there is no indication that it is messianic or applies to some future person like Jesus.

5.             We must infer through Midrashic interpretation, that Jesus also built the temple of God.

i.      In John 2:18-22 Jesus said “I will raise it [the temple] up” on resurrection day. This is the verse Christians use to prove the deity of Christ because Jesus raised himself from the dead. It must be inferred that Jesus was the builder of the temple, when he “raised it up”. John never alludes to 2 Sam 7 as being connected with the resurrection.

ii.      Nowhere in the book of Acts does anybody even teach that Jesus built a temple known as the church.

iii.      The first reference to a spiritual temple is in 1 Cor 3:9-17 where Christians are the builders not Christ.

v.      2 Cor 6:16 again says that the church is the temple of God but never mentions Jesus as the builder.

vi.      Ephesians 2:19-22 connects the church as the spiritual temple but fails to say Christ was the builder. Instead Jesus is himself a corner stone laid beside Christians by the Father.

b.               While Zechariah 6:12-13 also taught that the messiah would be a king and priest who builds a temple, nowhere in the New Testament is Zech 6:12-13 quoted as being fulfilled in Jesus, even though it obviously was. Here is a case where no New testament passage reaches back to Jesus as a temple builder in either 2 Sam 7 or Zech 6:12-13.

c.                While James quoted Amos 9:11 in the Jerusalem council in Acts 15:15-16, to prove the Gentiles did not need to be circumcised, he nowhere directly connects Jesus as the branch and builder of the fallen tabernacle of David. James just quotes the verse and left it to his audience to infer that it was Jesus who fulfilled Amos 9:11, that the rebuilt tabernacle of David is the church and that Jesus is the builder. All this had to be inferred into Amos which never even once uses the “messianic branch-child-king-priest” language. Even James’ “thus sayeth the Lord” (direct command bible authority) used the Midrashic interpretation method.

d.               In the end, there is no New Testament passage that directly reaches back to the Son of David building the temple/church.

e.               Christians today must therefore use the Midrashic interpretation method when they teach 2 Sam 7 as a dual prophecy where both Solomon and Jesus built a temple.

f.                 In the absence of any New Testament passage that quotes 2 Sam 7 to prove Christ built the New Testament temple (head/body/church), Christians today must therefore use the Midrashic interpretation method when they teach 2 Sam 7 was a dual prophecy where both Solomon and Jesus built a temple.

6.             Solomon was a sinner punished but not forsaken but sinless Christ was forsaken:

a.                In the original fulfillment with Solomon, God would chastise him when he sinned but never not forsake Solomon. Although Solomon was an idolater, womanizer and one who sowed to his flesh and not the spirit, God brought Solomon to repentance by tearing the northern 10 tribes away from him and giving them to Jeroboam. When Solomon tried to kill Jeroboam, he fled to Egypt for refuge until the death of Solomon two years later. The now repentant Solomon, having been chastised by God, then wrote two self-rebuke books. Ecclesiastes concluded that his Epicurean Hedonism was worthless and all that mattered was to love God and keep his commandments. God had Solomon write the Song of Solomon from the perspective of what was the Shulamite thinking when she left Solomon at the alter and she ran off and married the shepherd boy in her home town as an example of true love.

b.               Jesus was sinless and never needed to be rebuked by God which makes the second fulfillment not fit. In fact we see the opposite between Solomon and Jesus. Solomon was a sinner who was never forsaken while Jesus was sinless yet forsaken on the cross (My God why have you forsaken me). The solution is simple. Sinless Jesus was made be a sinner, on our behalf so we would not be forsaken! "Therefore, we are ambassadors for Christ, as though God were making an appeal through us; we beg you on behalf of Christ, be reconciled to God. He made Him who knew no sin to be sin on our behalf, so that we might become the righteousness of God in Him." (2 Corinthians 5:20–21)

a.                Solomon was a sinner whom God chastened but was never forsaken for his own reconciliation to God. Jeroboam got 10 tribes because of Solomon’s idolatry. Ecclesiastes and Song of Solomon are self-rebuke books written in 932BC. Solomon was forgiven and will be in heaven.

8.             In 90 BC the Jews, using their common Midrashic interpretation method, clearly understood 2 Sam 7; Amos 9:11 and Ps 2 to all be messianic prophecies in Dead Sea Scroll Florilegium 4Q174. They were able to infer that the Messiah would build the temple from these and other passages in their Tanakh. 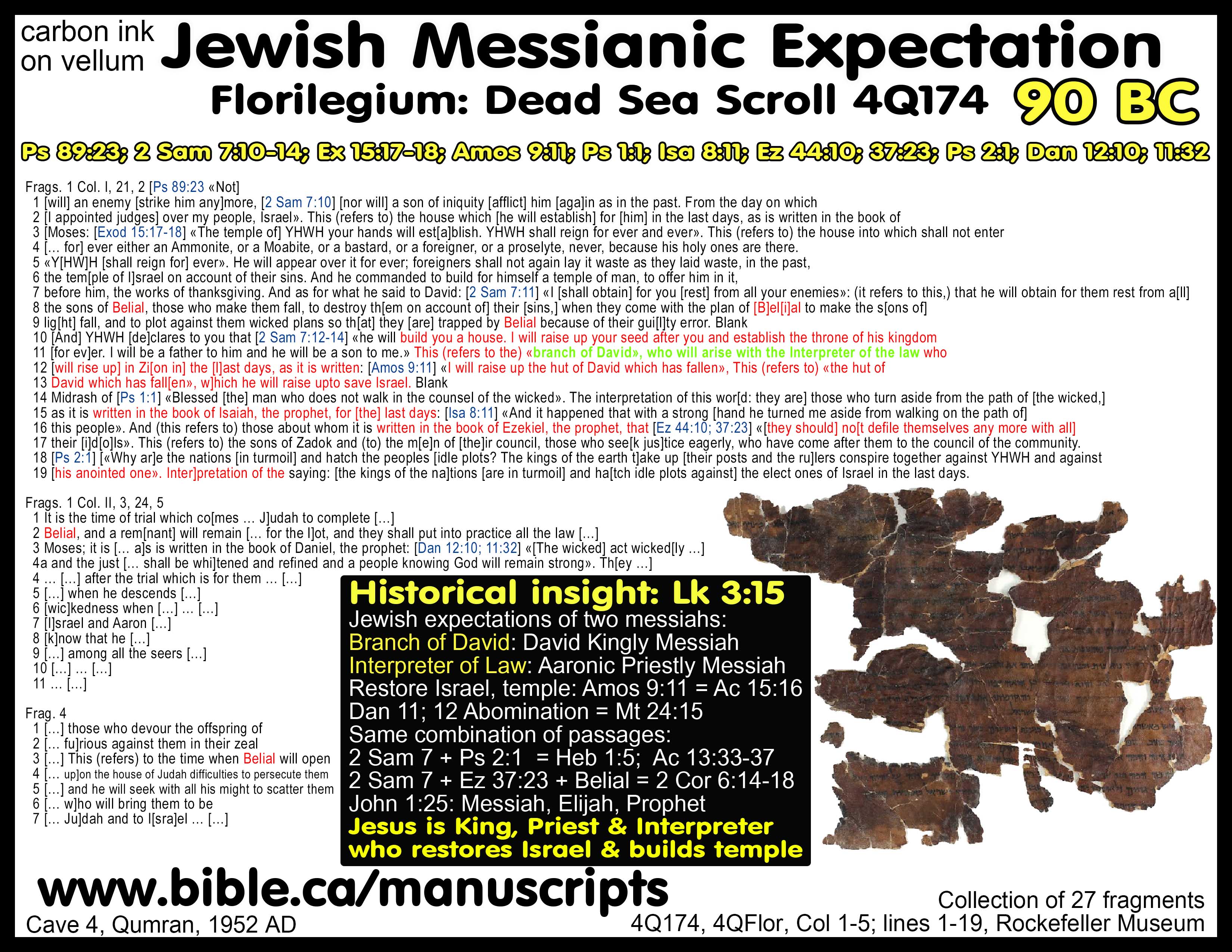 9.             This is typical Midrashic style and is useful as a guide in decoding the Olivet Discourse.