Bible Prophecy Fulfilled: Psalm 2 “You are my son, today I have begotten you”

Midrashic dual prophecy of Psalm 2 as a template to decode the Olivet Discourse:

c.         Not until the New Testament do we learn that Ps 2 is a messianic prophecy that applies first to David, then finally to Christ!

3.       “Begotten” and “Firstborn” represent a special status and not birth order or origin.

d.        This essentially refutes Jehovah’s Witnesses who misuse the designations of “Begotten” and “Firstborn” applied to Jesus in order to make him a creature.

I. David and Jesus were begotten by God at their coronation as kings:

A. David’s Coronation in Jerusalem in 1003 BC

a.         "Then Samuel took the horn of oil and anointed him in the midst of his brothers; and the Spirit of the Lord came mightily upon David from that day forward. And Samuel arose and went to Ramah." (1 Samuel 16:13)

a.         "Now the king and his men went to Jerusalem against the Jebusites, the inhabitants of the land, and they said to David, “You shall not come in here, but the blind and lame will turn you away”; thinking, “David cannot enter here.” (2 Samuel 5:6)

b.        "When the Philistines heard that they had anointed David king over Israel, all the Philistines went up to seek out David; and when David heard of it, he went down to the stronghold. Now the Philistines came and spread themselves out in the valley of Rephaim." (2 Samuel 5:17–18)

B. Jesus’ Coronation at Resurrection in AD 33

b.         “And we preach to you the good news of the promise made to the fathers, that God has fulfilled this promise to our children in that He raised up Jesus, as it is also written in the second Psalm, ‘You are My Son; today i have begotten You.’ “As for the fact that He raised Him up from the dead, no longer to return to decay, He has spoken in this way: ‘I will give you the holy and sure blessings of David.’ “Therefore He also says in another Psalm, ‘You will not allow Your Holy One to undergo decay.’ “For David, after he had served the purpose of God in his own generation, fell asleep, and was laid among his fathers and underwent decay; but He whom God raised did not undergo decay." (Acts 13:32–37)

b.        Notice Isaac is called Abraham’s “only begotten”: "By faith Abraham, when he was tested, offered up Isaac, and he who had received the promises was offering up his only begotten son; it was he to whom it was said, “In Isaac your descendants shall be called.” He considered that God is able to raise people even from the dead, from which he also received him back as a type." (Hebrews 11:17–19)

c.         "While he was still speaking, a bright cloud overshadowed them, and behold, a voice out of the cloud said, “This is My beloved Son, with whom I am well-pleased; listen to Him!” (Matthew 17:5)

a.         "who by the Holy Spirit, through the mouth of our father David Your servant, said, ‘Why did the Gentiles rage, And the peoples devise futile things? ‘The kings of the earth took their stand, And the rulers were gathered together Against the Lord and against His Christ.’" (Acts 4:25–26)

II. Firstborn is a special status independent of birth order:

A. Firstborn is special:

B. The pattern of the second born being blessed as the firstborn: 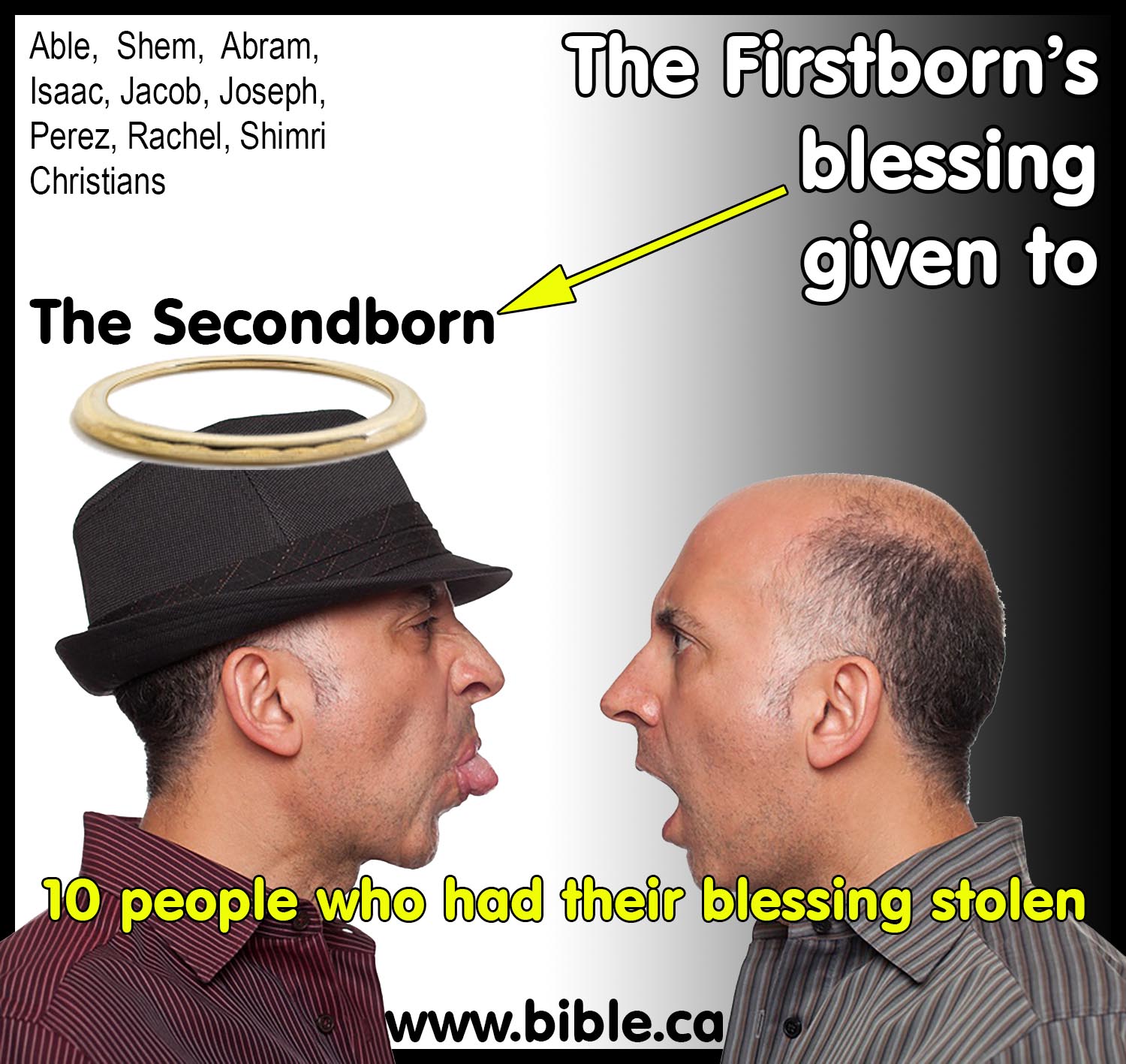 c.       While Genesis 5:32 says Noah was 500 years old when Shem, Ham, and Japheth were born, we learn from Gen 11:10 that Shem was 100 years old in the second year after the flood when Arpachshad was born. This proves to us that Shem was not born till Noah was 502 years old and younger than Japheth.

c.       “Then he left the land of the Chaldeans and settled in Haran. From there, after his father died, God had him move to this country in which you are now living." (Acts 7:4)

d.      The New testament solves it for us because Abraham left Haran at age 75 when his father died at age 205: So Abraham was born when Terah was 130 years old.

e.      So we know for certain that if Terah died at age 205 which triggered Abraham leaving Haran at age 77, that Abraham was born when Terah was 130 years old.

g.       “Furthermore, there are some warnings in the biblical text that if we add up these numbers, there will be distortions and errors. Take, for example, the last one in the series of twenty VIPs: Terah. It would appear that he lived 70 years and then had triplets born to him (Gen 11:26). His total life span was 205 years (Gen 11:32). However, something does not add up, for Abram left Haran after his father died (Gen 12:4; Acts 7:4), but he was only 75 years old at time and not 135, which he should have been had the figures been intended in a way that current usage would approve! Hence, had we added up the numbers in this part of the genealogy, we would already be 60 years in error, for the text must have meant that Terah “began having children when he was 70 years old,” but that Abram was actually born when his father was 130 and not when he was 70. He was not the eldest son, but his name is given first because he was the most significant figure.” (Hard Sayings of the Bible, W. C., Kaiser, P. H. Davids, F. F. Bruce, M. T. Brauch, p 49, 1996 AD)

b.      "Tell me, you who want to be under law, do you not listen to the law? For it is written that Abraham had two sons, one by the bondwoman and one by the free woman. But the son by the bondwoman was born according to the flesh, and the son by the free woman through the promise. This is allegorically speaking, for these women are two covenants: one proceeding from Mount Sinai bearing children who are to be slaves; she is Hagar. Now this Hagar is Mount Sinai in Arabia and corresponds to the present Jerusalem, for she is in slavery with her children. But the Jerusalem above is free; she is our mother. For it is written, “Rejoice, barren woman who does not bear; Break forth and shout, you who are not in labor; For more numerous are the children of the desolate Than of the one who has a husband.” And you brethren, like Isaac, are children of promise. But as at that time he who was born according to the flesh persecuted him who was born according to the Spirit, so it is now also. But what does the Scripture say? “Cast out the bondwoman and her son, For the son of the bondwoman shall not be an heir with the son of the free woman.” So then, brethren, we are not children of a bondwoman, but of the free woman." (Galatians 4:21–31)

2.       Jehovah’s Witnesses cannot use the terms “Begotten” and “Firstborn” to prove Jesus is a creature.

a.       “Begotten” and “Firstborn” represent a special status and not birth order or origin.

a.       Isaac was Abraham’s second son after Ishmael, yet he is called the “only begotten”.