Will Animals be in heaven?

Will Spot Be In Heaven?

Will Spot greet you with a loving, welcoming lick the moment after you die? 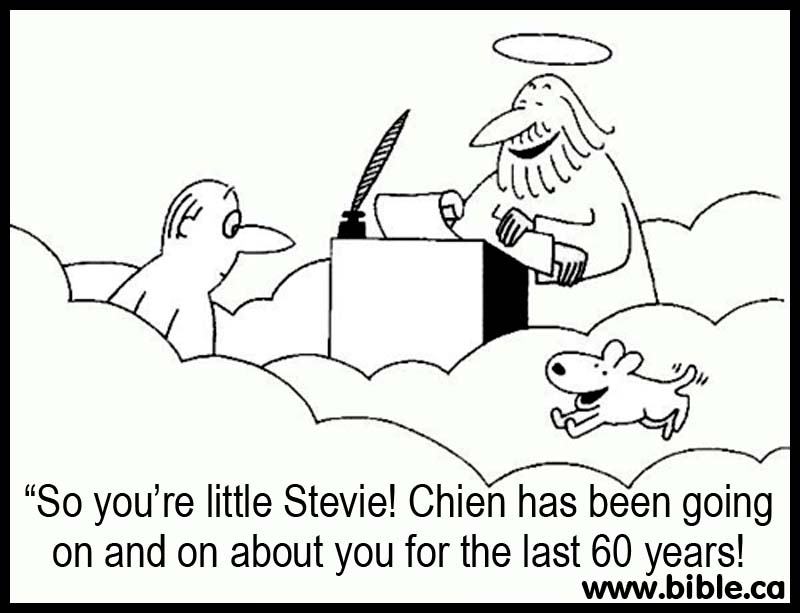 "For the fate of the sons of men and the fate of beasts is the same. As one dies so dies the other; indeed, they all have the same breath and there is no advantage for man over beast, for all is vanity. All go to the same place. All came from the dust and all return to the dust. Who knows that the breath [spirit] of man ascends upward and the breath [spirit] of the beast descends downward to the earth?" Ecclesiastes 3:19-21 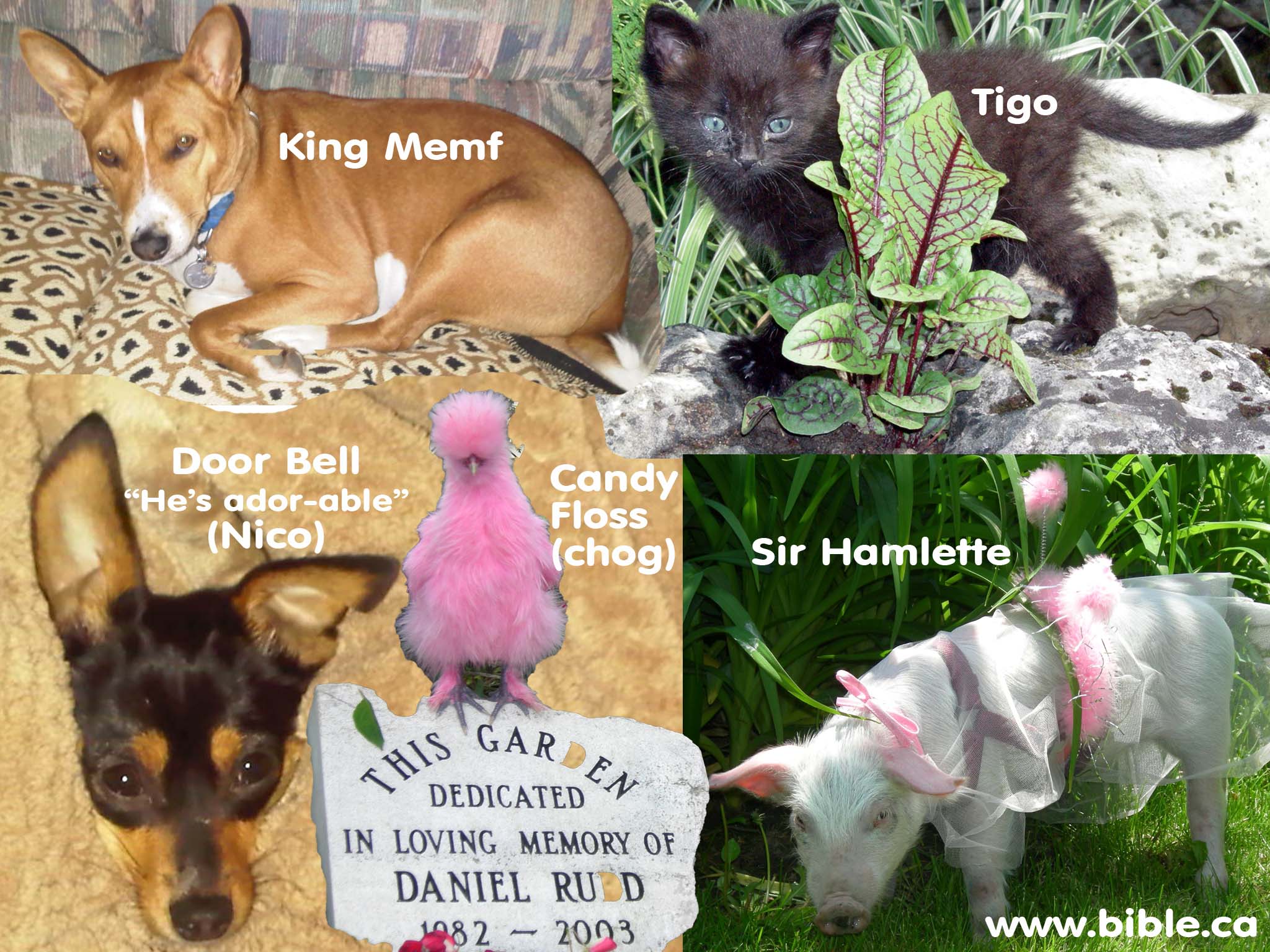 Will animals be in heaven?

a.       “Then God said, “Let Us make man in Our image, according to Our likeness; and let them rule over the fish of the sea and over the birds of the sky and over the cattle and over all the earth, and over every creeping thing that creeps on the earth.” God created man in His own image, in the image of God He created him; male and female He created them.” (Genesis 1:26–27)

b.      Man can kill animals, but not man because of this difference of image:

ii.      “But these, like unreasoning animals, born as creatures of instinct to be captured and killed, reviling where they have no knowledge, will in the destruction of those creatures also be destroyed,” (2 Peter 2:12)

2.       Both man and animal are trichotomous, having both a soul and a spirit: “Now may the God of peace Himself sanctify you entirely; and may your spirit and soul and body be preserved complete, without blame at the coming of our Lord Jesus Christ.” (1 Thessalonians 5:23)

a.       Animals are described as “living creatures/souls” in genesis with exactly the same word as the soul in man  [soul/nephesh].

i.      “Then God said, “Let the waters teem with swarms of living creatures [soul/nephesh], and let birds fly above the earth in the open expanse of the heavens.” God created the great sea monsters and every living creature  [soul/nephesh]that moves, with which the waters swarmed after their kind, and every winged bird after its kind; and God saw that it was good.” (Genesis 1:20–21)

iii.      “and to every beast of the earth and to every bird of the sky and to every thing that moves on the earth which has life [soul/nephesh], I have given every green plant for food”; and it was so.” (Genesis 1:30)

i.      “Then the Lord God formed man of dust from the ground, and breathed into his nostrils the breath [spirit/ ruwach] of life; and man became a living being [soul/nephesh]].” (Genesis 2:7)

ii.      “Behold, I, even I am bringing the flood of water upon the earth, to destroy all flesh in which is the breath [spirit/ ruwach] of life, from under heaven; everything that is on the earth shall perish.” (Genesis 6:17)

iii.       ““But now ask the beasts, and let them teach you; And the birds of the heavens, and let them tell you. “Or speak to the earth, and let it teach you; And let the fish of the sea declare to you. “Who among all these does not know That the hand of the LORD has done this, In whose hand is the life [soul/nephesh] of every living thing, And the breath [spirit/ ruwach] of all mankind?” (Job 12:7–10)

b.      Revelation has living creatures in heaven:

i.      “Out from the throne come flashes of lightning and sounds and peals of thunder. And there were seven lamps of fire burning before the throne, which are the seven Spirits of God; and before the throne there was something like a sea of glass, like crystal; and in the center and around the throne, four living creatures full of eyes in front and behind. The first creature was like a lion, and the second creature like a calf, and the third creature had a face like that of a man, and the fourth creature was like a flying eagle. And the four living creatures, each one of them having six wings, are full of eyes around and within; and day and night they do not cease to say, “Holy, holy, holy is the Lord God, the Almighty, who was and who is and who is to come.” And when the living creatures give glory and honor and thanks to Him who sits on the throne, to Him who lives forever and ever,” (Revelation 4:5–9)

4.       Even though the specific context of each of these messianic passages is in the church while on earth under the union of Christ in 303 AD, animals may be cast in heaven in an antitypical way.

a.       “And the wolf will dwell with the lamb, And the leopard will lie down with the young goat, And the calf and the young lion and the fatling together; And a little boy will lead them. Also the cow and the bear will graze, Their young will lie down together, And the lion will eat straw like the ox. The nursing child will play by the hole of the cobra, And the weaned child will put his hand on the viper’s den.” (Isaiah 11:6–8)

b.      ““The wolf and the lamb will graze together, and the lion will eat straw like the ox; and dust will be the serpent’s food. They will do no evil or harm in all My holy mountain,” says the LORD.” (Isaiah 65:25)

c.       “In that day there will be inscribed on the bells of the horses, “HOLY TO THE LORD.” And the cooking pots in the LORD’S house will be like the bowls before the altar.” (Zechariah 14:20)

5.       There appear to be horses in heaven in addition to the 4 living creatures in Revelation 6

a.       “Then I saw when the Lamb broke one of the seven seals, and I heard one of the four living creatures saying as with a voice of thunder, “Come.” I looked, and behold, a white horse, and he who sat on it had a bow; and a crown was given to him, and he went out conquering and to conquer.” (Revelation 6:1–2)

b.      “And I saw heaven opened, and behold, a white horse, and He who sat on it is called Faithful and True, and in righteousness He judges and wages war.” (Revelation 19:11)

6.       Ontologically, man and animal are not much different:

c.       Memory in man does not reside in the physical brain but the spirit. The rich man and Lazarus were dead and their brains were dust, yet notice all the things they remembered and knew in addition to retaining their personalities and identity:

i.      ““Now the poor man died and was carried away by the angels to Abraham’s bosom; and the rich man also died and was buried. “In Hades he lifted up his eyes, being in torment, and saw Abraham far away and Lazarus in his bosom. “And he cried out and said, ‘Father Abraham, have mercy on me, and send Lazarus so that he may dip the tip of his finger in water and cool off my tongue, for I am in agony in this flame.’ “But Abraham said, ‘Child, remember that during your life you received your good things, and likewise Lazarus bad things; but now he is being comforted here, and you are in agony. ‘And besides all this, between us and you there is a great chasm fixed, so that those who wish to come over from here to you will not be able, and that none may cross over from there to us.’ “And he said, ‘Then I beg you, father, that you send him to my father’s house— for I have five brothers—in order that he may warn them, so that they will not also come to this place of torment.’” (Luke 16:22–28)

8.       Finally, since man is made in the image of God and since man can love an animal as much as a human, such a bond is worthy of eternity. Why would God allow us to create bonds with things we love and never see again?

4.       I won't be surprised if spot, my pet goose, who thinks he is a duck, has pure white chicken named stripe as his brother and has me as his mommy, greets me with a welcoming lick when I die!