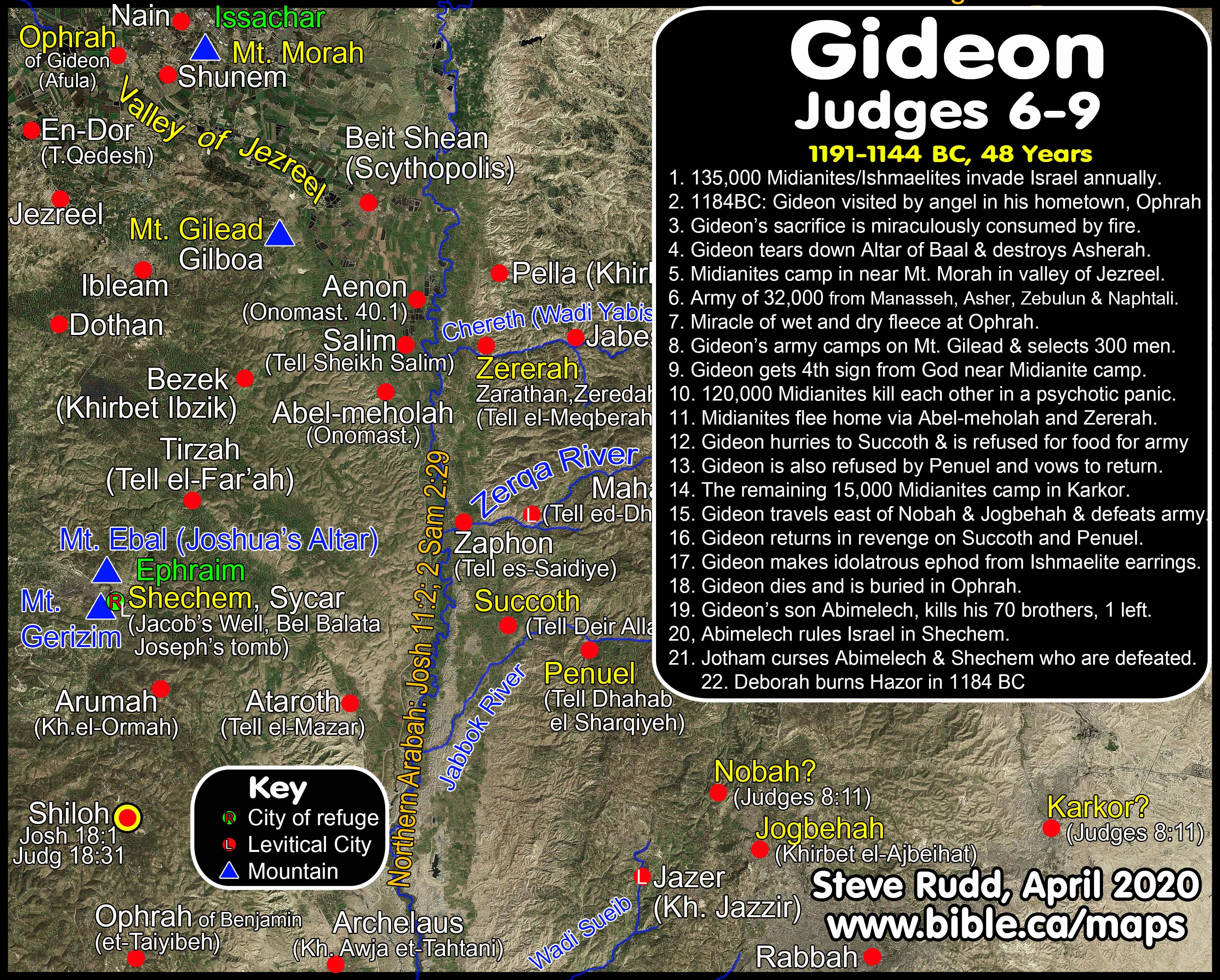 Timeline, maps, chronology, sermons of Gideon
Maps of the Deborah, Timeline of Gideon
Sermons and Outlines of Gideon
Archeological evidences of Gideon

c.         Before Gideon liberated Israel in 1184 BC the area from Gaza to the Jezreel Valley had suffered from annual raids of Midianites and the Amalekites for 7 years: 1191-1184 BC.

e.        Deborah was Judging Israel during these 20 years of oppression.

i.      In 1184 BC, Deborah liberated Israel at Mt. Tabor from Jabin, king of Hazor when Sisera was later killed while sleeping in a tent and Hazor was finally burned.

ii.      In 1184 BC, Gideon’s famous army of 300 defeated the Midianites and Amalekites at Mt. Gilead. Whereas Deborah was active during the 20 years of oppression, Gideon was only active one year in 1184 BC.

i.           During the 40 years of peace, the mass immigration of the Philistines in 1177 BC trigger the collapse of the Late Bronze Age in the 8th year of Pharaoh Ramesses III.

c.         Gideon visited by angel in his hometown of Ophrah. This is different from the modern town of Ophrah in Israel today because there are no archaeological finds in the modern city. Gideon was called by God in 1184 BC to form an army. Gideon’s sacrifice is miraculously consumed by fire.

h.        120,000 Midianites kill each other in a psychotic panic. Midianites flee home via Abel-meholah and Zererah.

i.           Gideon hurries to Succoth & is refused for food for army. Gideon is also refused by Penuel and vows to return.

o.        Gideon’s son Abimelech kills all his 70 brothers except one. Abimelech rules Israel in Shechem. Jotham curses Abimelech & Shechem who are defeated.

Synchronisms between the Bible, Chronology and Archeology:

A.     Merneptah Stele in 1205 BC: Although not recorded in the Bible, the Merneptah Stele documents Egypt’s invasion of Israel in 1205 BC, precisely at the end of the 80 years of Peace under Ehud (1204 BC) and at the begging of the oppression of the Canaanites in Judges 4:3 from 1204-1184 BC. Notice that those who misdate the death of Joshua to 1384 BC (29 years too early), put the Merneptah Stele in 1205 BC directly inside the 40 years of peace under Deborah which started in 1213 BC. The Merneptah stele fits perfectly with high precision in the Judges chronology when you set the date of Joshua correctly at 1356 BC.

B.      Deborah burns Hazor in 1184 BC: Deborah burned Hazor in 1184 BC. Deborah’s final liberation act of burning Hazor was at the beginning of the 40 years of peace in 1184 BC. The 20 years of oppression under the Canaanites started in 120 and ended in 1184 BC. Those who misdate the death of Joshua to 1384 BC (29 years too early) make a double mistake in dating Deborah’s burning of Hazor. They misdate Deborah’s burning of Hazor to the beginning of the 20-year Canaanite oppression in 1204 BC rather than the end in 1184 BC. When you add these 20 misdated years to the 29-year error of when Joshua died, it is easy to see how their date for the burning of Hazor by Deborah in 1230 BC is a whopping 46 years too early.

C.      Deborah and Gideon concurrent 40 years of peace: A spectacular chronological discovery is that Deborah and Gideon delivered Israel from two different armies 30 km apart the same year. Deborah’s battle at Mt Tabor and Gideon’s army 30 km south at Mt Gilead happened the same year. We have a synchronism between Deborah and Gideon because their respective 40 years of peace of began in 1184 BC and end in 1144 BC. It was during these 40 years of peace that Philistines arrived in Judah in 1177 BC in 8th yr. of Ramesses III. Although Deborah is in Indivisible Chronology Unit #1 and Gideon is in Indivisible Chronology Unit #2 each defeated a different enemy of Israel the same year, using the same tribal armies of Zebulun and Naphtali. Both Deborah and Gideon completed their liberation the same year in 1184 BC. Deborah began to fight the king of Hazor in central Israel at Mt Tabor then the battled moved north to Hazor. Gideon’s famous army of 300 defeated the annual incursion of the Midianites and Amalekites at Mt. Gilead which is 30 km south of Deborah’s battle at Mt. Gilead. When the Midianites fled Transjordan, Gideon pursued them towards Amman and defeated them. This is confirmation that our approach is correct.