Black Obelisk of Shalmaneser III: 827 BC

1.       Importance of the Kurkh monolith for Bible students:

a.         Most important is the famous reference to King Jehu of the house of king Omri: “I received tribute from Jehu, [Iaúa] house of Omri. [Bīt-Ḫumrî]: silver, gold, a gold bowl, a  gold tureen, gold vessels, gold pails, tin, the staff of the king’s hand and spears.”

b.        Eponymy of [governor] Daiiān-Aššur: During this period of Assyrian history, each year was named after one of the governors within the Assyrian empire. This allows us to synchronize Assyrian to Bible chronologies and generate specific historic dates.

a.         853 BC, year 6. The battle of Qarqar where Shalmaneser III warred against Ben-Hadad II and his coalition of 12 kings, one of whom was Ahab: “I received gifts from all the kings of Hatti. At that time Hadad-ezer [Ben-Hadad II] of Aram” 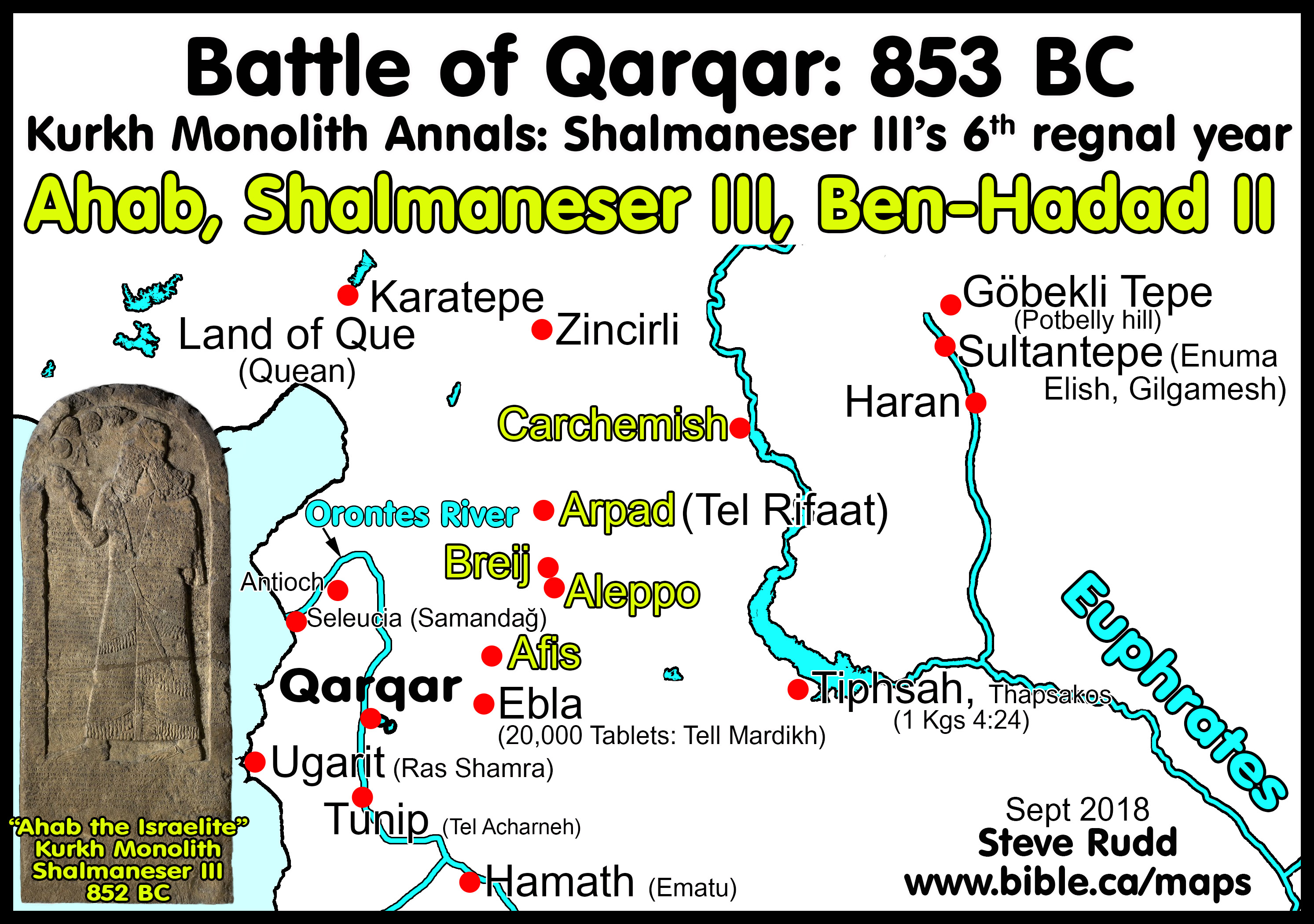 b.        849 BC, Year 10: Battle of Carchemish with Ben-Hadad II and 12 kings, one of whom was Jehoram, king of Israel: [Note: Battle at Carchemish, then War with 12 kings Aram, Samaria] “In the tenth year of my reign, I crossed the Euphrates for the eighth time. I captured the cities of Sangara of Carchemish. I advanced against the cities of Arame. I captured Arnê, his royal city, together with 100 of his small cities.” (Lines 85-86)

c.         848 BC, Year 11: Battle of Hamath: War with Ben-Hadad II and 12 kings, one of whom was Jehoram, king of Israel: “In the eleventh year of my reign, I crossed the euphrates for the ninth time. I captured countless cities. I descended upon cities of the land of Hamath. I captured 89 cities. Hadad-ezer [Ben-Hadad II] of Aram and twelve kings of the land of Hatti stood by each other. I was successful in overthrowing them.” (Lines 87-89)

i.      “In the fourteenth year of my reign, I mustered my land. I crossed the Euphrates. Twelve kings advanced to meet me. I battled with them and successfully overthrew them.” (Lines 92-93)

i.      The stele was erected as a kind of “rabbit’s foot” lucky charm to invoke the assistance of the pagan god named “Melqart”.

ii.      Of course, Shalmaneser was also invoking the assistance of his own pagan god’s names “Assur”.

g.         838 BC, Year 21: Battle of Aram: “In the twenty-first year of my reign, I crossed the Euphrates for the twenty-first time. I advanced against the cities of Hazael of Aram. I captured four of his cities. I received the gifts of the Tyrians, Sidonians, and Gebalites [Byblos].” (Lines 102-104)

I. About the Black Obelisk:

1.      “This text is on the famous "Black Obelisk" discovered by Layard at Calah in 1846, The obelisk is remarkably free of damage in all but a few minor places, which can easily be restored. It has four sides, on each of which there are five panels of reliefs portraying scenes of the king's exploits and above each panel there is an epigraph describing the scene in words. Above and below the five panels of reliefs, on all four sides, is a continuous text, the text edited here. The epigraphs are edited separately as A.0.102.87-91. The text is the fullest and one of the latest accounts of the military campaigns of Shalmaneser, providing a narrative for every regnal year down to and including his thirty-first year (828 BC). The engraver ran out of space at this point and there is neither a description of building nor concluding formulae. The text was, then, composed late in 828 BC, or more probably in 827 BC. The inscription begins with an invocation of gods (lines 1-14) and the royal name and epithets (lines 15-21). This is followed by the narrative of the campaigns (lines 22-190) and much of this is similar to the narrative in the broken statue inscription from Calah, although there are frequently variations (A.0.102.16). The last few campaigns (lines 141-90) were led not by the king but by his field marshal, Daiiān-Aššur. This unusual circumstance caused some confusion for the scribe, as it did for the scribe of A.0.102.16, who fluctuated between third person (Daiiān-Aššur) and first person (the king) in the narrative. In the translation I have consistently used third person in these passages but put an asterisk after the pronoun where the text actually has first person.” (The Royal inscriptions of Mesopotamia. Assyrian periods Vol. 3, A. Kirk Grayson, p62, 1996 AD)

2.      “COMMENTARY The obelisk (BM 118885 = 48-11-4,1) is about two metres in height and has been collated. There is some uncertainty regarding its exact provenance at Calah (see Gadd). All bibliography, except specific references to individual epigraphs, is included below. The beginning of this text (lines 1-47) is identical, with minor variants, to A.0.102.15. Therefore this latter text has been edited here as "ex. 2" for the sake of convenience. A few restorations in the master line have been made from "ex. 2." The interested reader can check the scores for details.” (The Royal inscriptions of Mesopotamia. Assyrian periods Vol. 3, A. Kirk Grayson, p62, 1996 AD)

1.       The Black Obelisk of Shalmaneser III tells 5 stories of conquest.

a.       There is an inscriptions above the each of the 5 sets of pictorial 4 reliefs on each of the four sides..

b.       Each of the 5 tribute texts are pictured with 4 panels that run horizontally around the stele that read left to right, starting with the first panel.

a.       Tribute of Sûa, the Gilzânite. I received from him: silver, gold, lead, copper vessels, staves for the hand of the king, horses, two-humped camels.

c.       Tribute of the land of Musri. I received from him: two-humped camels, a river-ox, a sakêa, a sûsu, elephants, monkeys, apes.

III. Translation of the Black Obelisk

1.       The Black Obelisk of Shalmaneser III is a stunning confirmation of the historical accuracy of the Bible:

a.       It names Jehu, Omri, Ben-Hadad II and Hazael, and the cities of Tyre and Sidon

b.       Pictorial relief #2 not only names Jehu but also pictures him bowing to Shalmaneser III. The figures in the four panels all feature images of Israel in 853 BC.

2.       Six battles between Israel and Assyria: It highlights the ongoing battles between Shalmaneser III of Assyria and the coalition of 12 kings under the command of Ben-Hadad II of Aram (Damascus) which included three Israeli kings: Ahab, Jehoram and Jehu.

4.      What you read in the book, you find in the ground! Find me a church to attend in my home town this Sunday!