The Assassination of Gedaliah

"The rebellion to restore the throne of David on earth."

Bulla of Gedaliah who is over the house 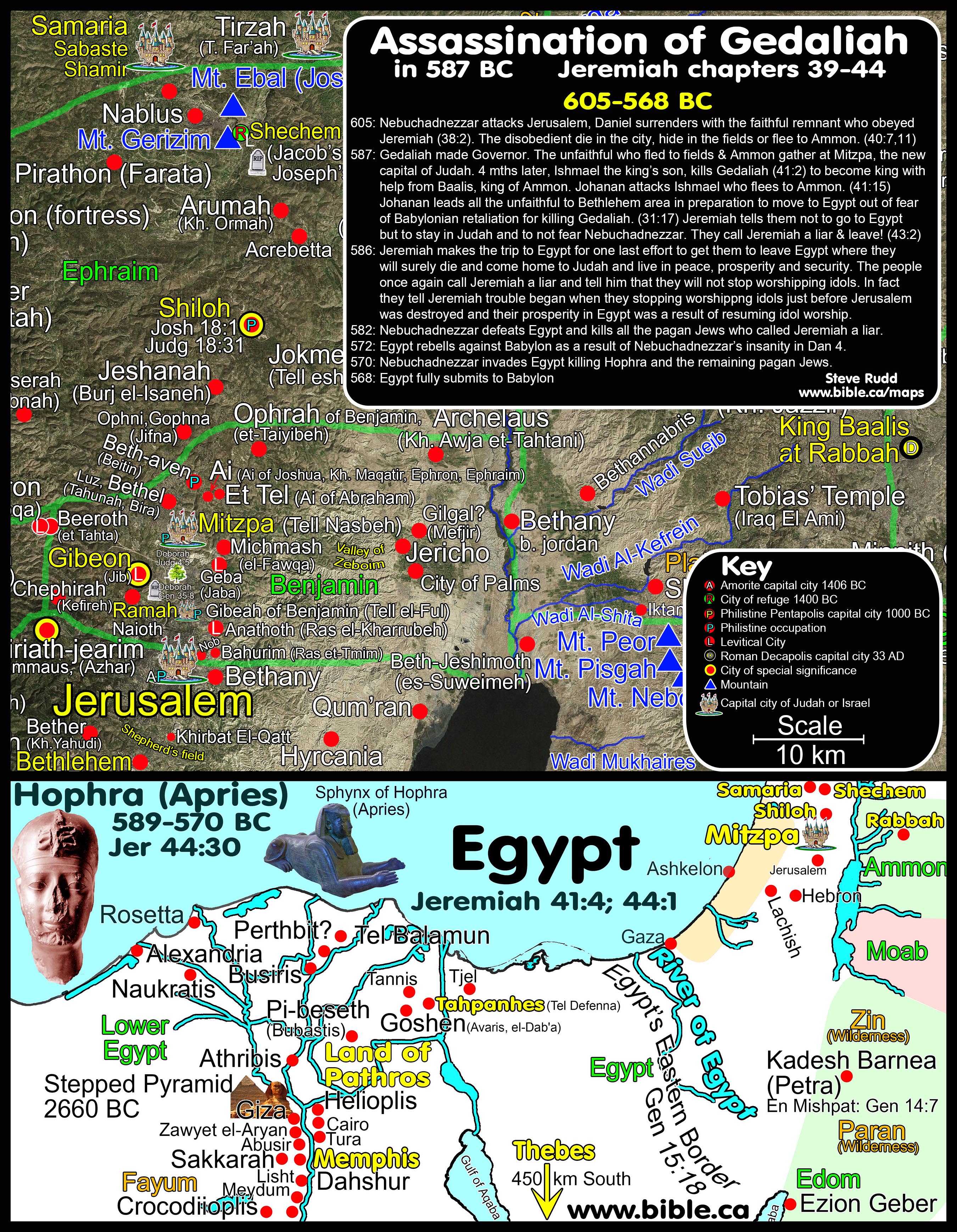 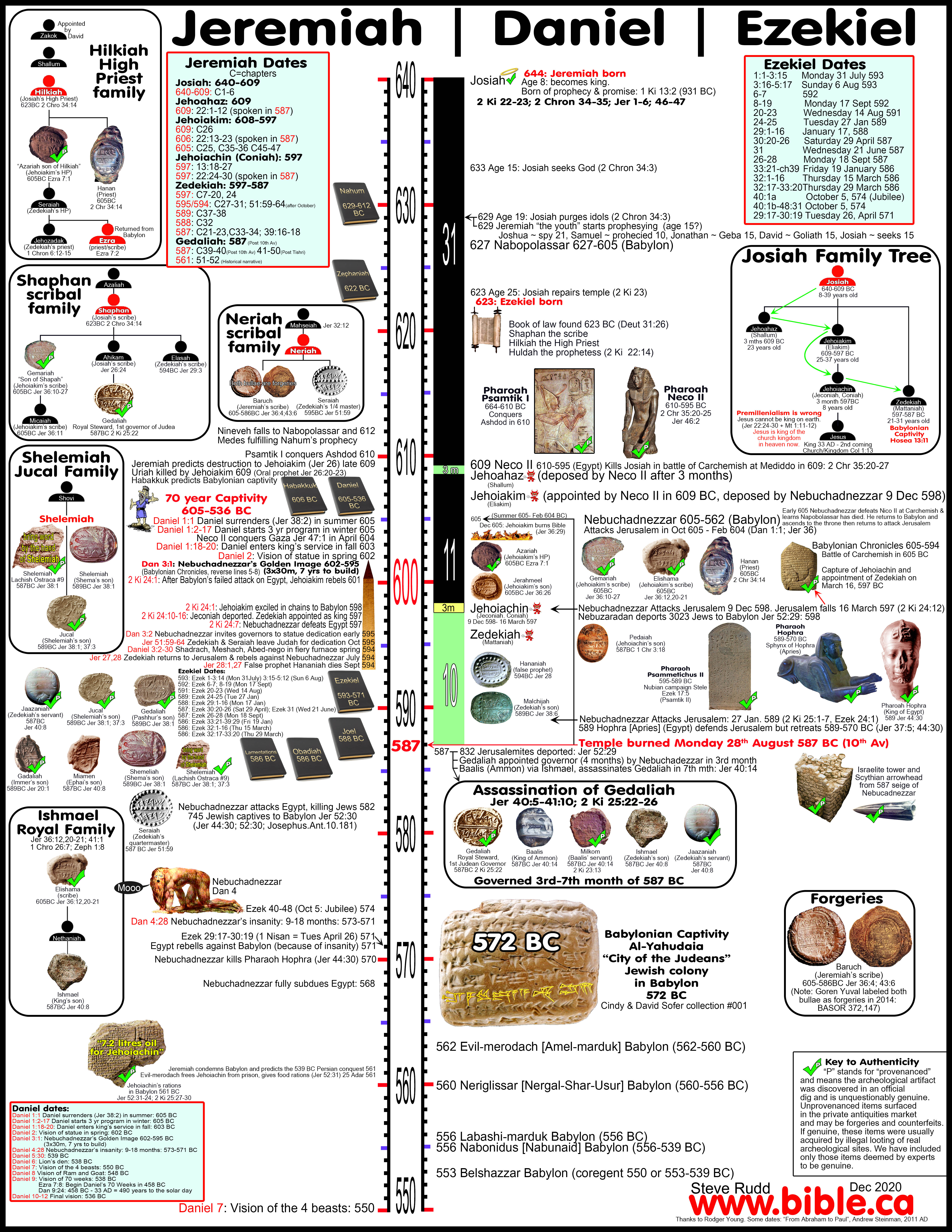 The assassination of Gedaliah, 1st Governor of Judea in 587 BC

Introduction: The assassination of Gedaliah

II. The Bible story of the assassination of Gedaliah, 1st governor of Judea:

III. The extinction of the throne of David on earth: Coniah, Gedaliah

a.      Jeremiah 22:24-30 made the important prophecy that no direct, blood descendant of Jeconiah (Coniah) would ever sit and rule on a physical throne in physical Jerusalem ever again. This proves premillennialism wrong in that it brings Christ back to earth to sit on the throne of David in Jerusalem. (Mt 1:12; Hos 13:11; Acts 2:29-36)

b.      No descendant of Jeconiah will ever rule in physical Jerusalem ever again: "“As I live,” declares the Lord, “even though Coniah [Jehoiachin] the son of Jehoiakim king of Judah were a signet ring on My right hand, yet I would pull you off; and I will give you over into the hand of those who are seeking your life, yes, into the hand of those whom you dread, even into the hand of Nebuchadnezzar king of Babylon and into the hand of the Chaldeans. “I will hurl you and your mother who bore you into another country where you were not born, and there you will die. “But as for the land to which they desire to return, they will not return to it. “Is this man Coniah a despised, shattered jar? Or is he an undesirable vessel? Why have he and his descendants been hurled out And cast into a land that they had not known? “O land, land, land, Hear the word of the Lord! “Thus says the Lord, ‘Write this man down childless, A man who will not prosper in his days; For no man of his descendants will prosper Sitting on the throne of David Or ruling again in Judah.’ ”" (Jeremiah 22:24–30)

g.      Although Josiah had three sons who were kings, Coniah was the end of the dynasty of King David. 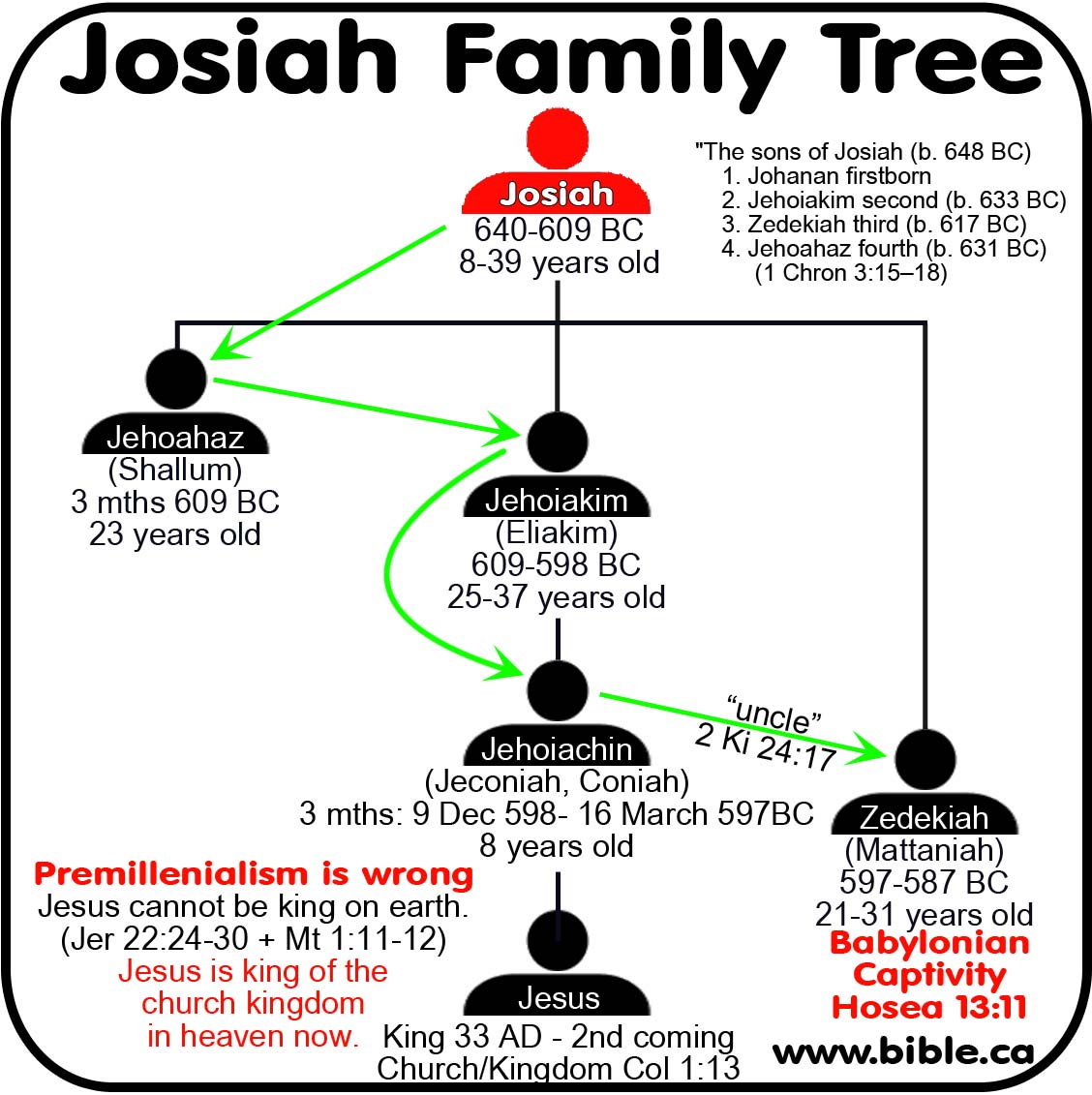 3.      Jeremiah offered messianic hope of restoration of Judah and Israel in Christ, in the church:

a.      "Then I will give you shepherds [apostles, church elders] after My own heart, who will feed you on knowledge and understanding. “It shall be in those days when you are multiplied and increased in the land,” declares the Lord, “they will no longer say, ‘The ark of the covenant of the Lord.’ And it will not come to mind, nor will they remember it, nor will they miss it, nor will it be made again. “At that time they will call Jerusalem ‘The Throne of the Lord,’ and all the nations will be gathered to it, to Jerusalem, for the name of the Lord; nor will they walk anymore after the stubbornness of their evil heart. “In those days the house of Judah will walk with the house of Israel, and they will come together from the land of the north to the land that I gave your fathers as an inheritance." (Jeremiah 3:15–18)

b.      The throne of God was originally in heaven, but during the time of Saul the throne came to earth until the deportation of Jeconiah (Coniah) and Zedekiah.

c.       Jesus Christ sits on the throne of David right now as king of the universe which he created by the power of his own divine might.

d.      "‘Behold, days are coming,’ declares the Lord, ‘when I will fulfill the good word which I have spoken concerning the house of Israel and the house of Judah. ‘In those days and at that time I will cause a righteous Branch of David to spring forth; and He shall execute justice and righteousness on the earth. ‘In those days Judah will be saved and Jerusalem will dwell in safety; and this is the name by which she will be called: the Lord is our righteousness.’ “For thus says the Lord, ‘David shall never lack a man to sit on the throne of the house of Israel; and the Levitical priests shall never lack a man before Me to offer burnt offerings, to burn grain offerings and to prepare sacrifices continually.’ ” The word of the Lord came to Jeremiah, saying, “Thus says the Lord, ‘If you can break My covenant for the day and My covenant for the night, so that day and night will not be at their appointed time, then My covenant may also be broken with David My servant so that he will not have a son to reign on his throne, and with the Levitical priests, My ministers. ‘As the host of heaven cannot be counted and the sand of the sea cannot be measured, so I will multiply the descendants of David My servant and the Levites who minister to Me.’ ” And the word of the Lord came to Jeremiah, saying, “Have you not observed what this people have spoken, saying, ‘The two families which the Lord chose, He has rejected them’? Thus they despise My people, no longer are they as a nation in their sight. “Thus says the Lord, ‘If My covenant for day and night stand not, and the fixed patterns of heaven and earth I have not established, then I would reject the descendants of Jacob and David My servant, not taking from his descendants rulers over the descendants of Abraham, Isaac and Jacob. But I will restore their fortunes and will have mercy on them.’ ”" (Jeremiah 33:14–26)

4.      Only through Jesus Christ, the branch (seed) of David are the fortunes of David and the throne of David restored IN HEAVEN NOW not on the earth.

IV. The "Saul vs. David | Gedaliah vs. Ishmael" reverse allegory

V. The Governors of Judea after Jerusalem was destroyed in 587 BC:

VI. Six archeological finds connected with the Assassination of Gedaliah: