a.         It refers to one of many Egyptian military lookout posts scattered across Egypt.

b.        The existence of the Egyptian migdol's are confirmed by archeology.

2.       We have no archaeological evidence for any migdol at the Straits of Tiran, but this is a very likely place for one to have existed, given the tri-intersection of the Red Sea.

a.         A migdol located on the summit of one of the hills overlooking the sea would not require much additional architecture to elevate.

b.        Migdols would be equipped with passenger pigeons as communication agents. A passenger pigeon was able to get a message to pharaoh the Israel was “trapped by the wilderness” in only 4 hours since they travel at 100 km/h.

c.         If Egypt was about to be attacked the ships or troops would be spotted and an early warning sent to pharaoh to ready his army to counter the attack.

d.        In the Late Bronze Age, Egypt controlled the mines at Serabit el-Khadim on the east side of the Gulf of Suez and the Timna mines 15 km north of Elat on the Gulf of Aqaba. A watchtower located at this important three-way shipping crossroads would be invaluable.

A. Bible texts where Migdol's are mentioned in the Bible:

1.      Remember, there were many Migdol's and the one's mentioned in Jeremiah and Ezekiel are not the same one as mentioned in the Exodus.

a.       Exodus 14:2 :"Tell the sons of Israel to turn back and camp before Pi-hahiroth, between Migdol and the sea; you shall camp in front of Baal-zephon, opposite it, by the sea.

b.      Numbers 33:7: They journeyed from Etham and turned back to Pi-hahiroth, which faces Baal-zephon, and they camped before Migdol.

b.      Jeremiah 46:14: "Declare in Egypt and proclaim in Migdol, Proclaim also in Memphis and Tahpanhes; Say, 'Take your stand and get yourself ready, For the sword has devoured those around you.'

c.       Ezek 29:10; 30:6: therefore, behold, I am against you and against your rivers, and I will make the land of Egypt an utter waste and desolation, from Migdol to Syene and even to the border of Ethiopia.

d.      Ezekiel 30:6: 'Thus says the Lord, "Indeed, those who support Egypt will fall And the pride of her power will come down; From Migdol to Syene They will fall within her by the sword," Declares the Lord God.

B. The Migdol at the Straits of Tiran of Tiran:

1.       We have no archaeological evidence of any Egyptian watchtower at the Straits of Tiran.

2.       Our proposed exodus migdol sat on top of the mountain with an elevation of 500 meters.

a.         The Migdol located at the three way intersection of the Red Sea, gulf of Suez and gulf of Aqaba was one of the most important.

b.        From the vantage point on the ridge of mountains near the sea, you could get a view for 30 miles each way. It was of huge military and defensive importance.

a.         Large numbers of pigeons were taken to each Migdol and kept captive, until they were needed to fly back "home" to Pharaoh in Egypt.

4.       Scripture says that Israel came to a dead end at Etham, then God told them to turn back and retrace their steps and camp directly beside the "Migdol" in order for pharaoh to say, "Now the Lord spoke to Moses, saying, "Tell the sons of Israel to turn back and camp before Pi-hahiroth, between Migdol and the sea; you shall camp in front of Baal-zephon, opposite it, by the sea. "For Pharaoh will say of the sons of Israel, 'They are wandering aimlessly in the land; the wilderness has shut them in.' "Thus I will harden Pharaoh's heart, and he will chase after them; and I will be honored through Pharaoh and all his army, and the Egyptians will know that I am the Lord." And they did so." Exodus 14:1-4

5.       Israel spent arrived on day 17, spent 8 days camped beside the Red Sea waiting for Pharaoh to arrive. It would take only five hours for the message to get to Pharaoh that Israel was back tracking. Then it took the army only 7 days to make the trip with horses and chariots.

6.       God was deliberately baiting Pharaoh who knew the terrain. Etham was the end of the 200 mile long coastal plain. When Israel started back towards Egypt, Pharaoh chased towards them with his 600 chariots.

7.       A migdol is a military watchtower and fortress structure. Migdols were very common in the ancient world and Egypt had many of them throughout their territory. Forest fire towers in national parks spot fires and migdols spot foreign military attacks. Egyptian migdols can be fortified structures with high walls and an elevated stone or wooden platform or simple viewing stations perched on the top of hills. The Straits of Tiran was is a critical strategic location for an Egyptian migdol military watchtower to monitor mariner traffic and an early warning system of military attacks on Egypt. The straits of Tiran overlook the three-way intersection of the Arabian, Aqaba and Suez gulfs. Messenger pigeons were used in Egypt at the time of Abraham and the migdol at Tiran would be equipped with them as fast communication systems. 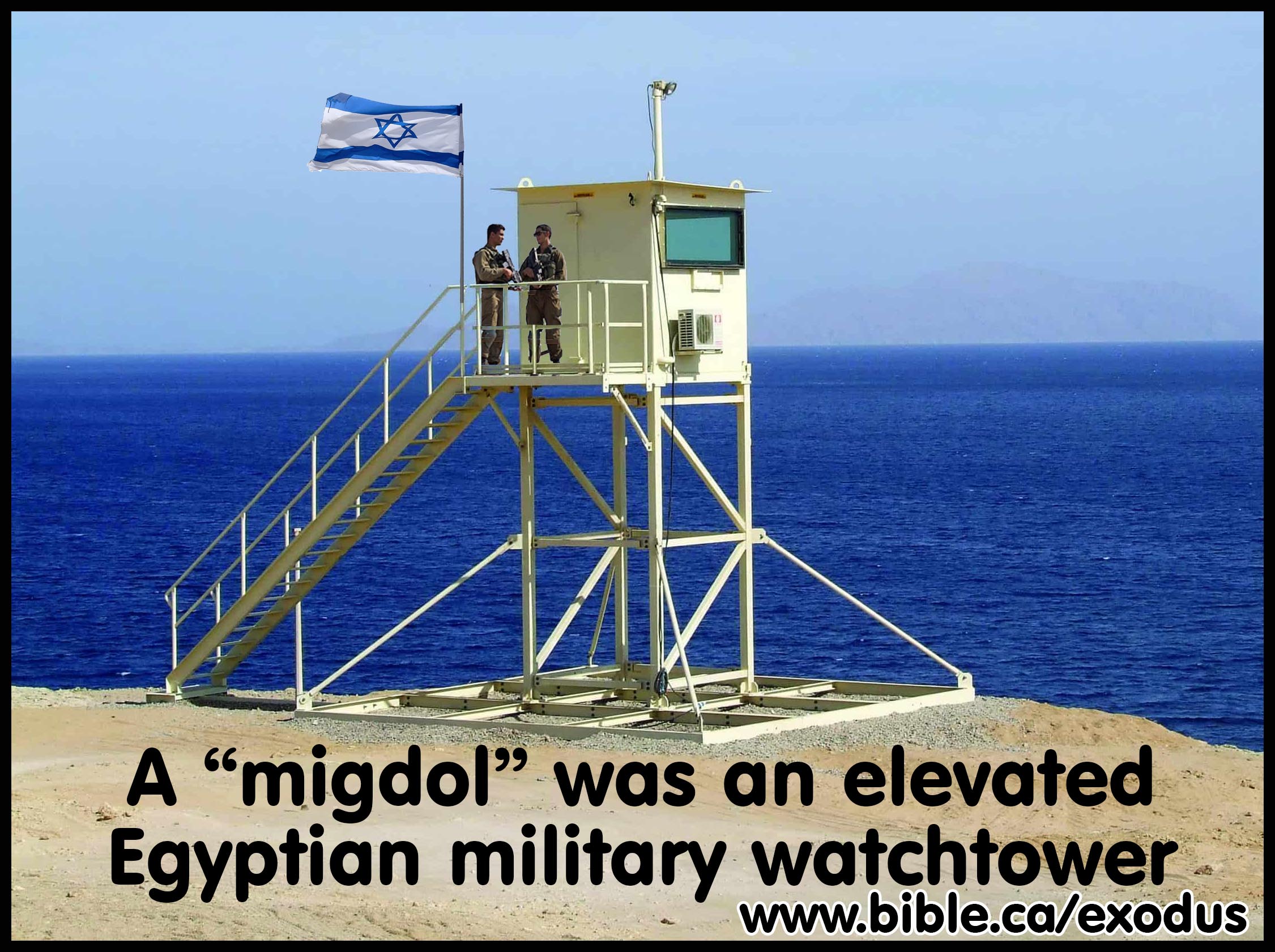 D. The positioning of the camp of Israel:

F. How the traditional choice for Migdol fails:

1.       In the traditional exodus route, Migdol would be placed on the Egyptian side of the crossing. It is important to remember that they went past the Migdol to Etham, then back tracked to camp at the Red Sea. For the Bitter lakes, such is impossible.

2.       For the Port of Suez crossing, there is a nice mountain range that would work well for a Migdol watch post. In fact we believe it is likely one existed there, but the other serious problems with the Port of Suez disqualify it as a candidate for the Red Sea crossing. For example there is no logical place for Etham past the crossing point, since it opens up into a huge flat plain.

a.       There are no examples in ancient literary sources that a migdol was merely a mountain range. In all cases it was a manned elevated military fortress.

c.       The Straits of Tiran on the other hand is a critical location for an Egyptian migdol military watchtower to monitor mariner traffic and an early warning system of military attacks on Egypt.