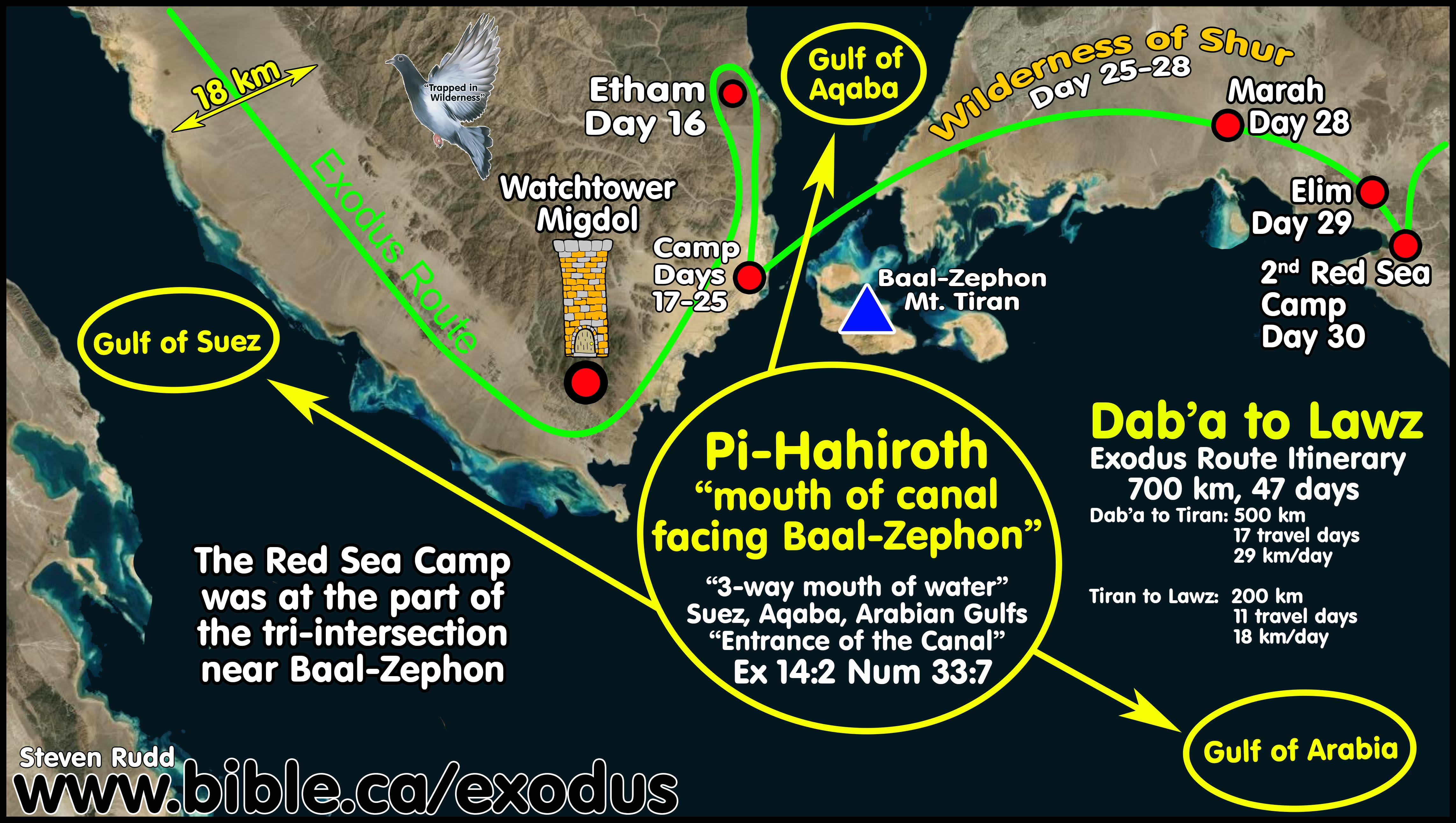 2.      The Hebrew word "Pi-Hahiroth" is a metaphoric term that means any or all of the following:

3.      The “entrance to the canal” refers to the large, central, tri-intersection of ocean between the Gulf of Suez, the Gulf of Aqaba and the Gulf of Arabia.

a.       This could refer to an area of shoreline on either Egypt proper, the modern Sinai Peninsula or Arabia.

b.      Without a second geographical marker, the "mouth of water" simply refers to the central place where all three bodies of water meet.

4.      God provided a second geographic marker for the location of the Red Sea camp by saying it was located at Pi-Hahiroth “facing” or “towards” Baal-Zephon.

a.       This second geographic reference “entrance to the canal FACING Baal-Zephon” identifies the shoreline from the southern tip of the modern Sinai Peninsula north towards the Gulf of Aqaba.

b.      Baal-zephon is located at Mt. Tiran, which is 501 meters high. Mt. Tiran is located on Tiran Island, Saudi Arabia. The language of the Bible makes it clear that it was on the opposite shore of the Red Sea: "camp in front of Baal-zephon, opposite it". (Ex 14:2)

c.       The Israel Red Sea camp was below the Egyptian military Migdol’s watchful eye, at the part of the tri-intersection of the three Gulfs which were directly opposite Baal-Zephon.

5.      The “mouth-like” isthmus at the southern tip of the modern Sinai Peninsula is an interesting double coincidence:

a.       This bay looks very much like a gaping mouth from aerial satellite photos and it is unlikely that it looked this way 3400 years ago.

b.      This “mouth-like” bay just happens to face towards Baal-Zephon.

c.       Although Pi-Hahiroth looks like a "mouth" today, geologist, Dr. Don Patton is correct in saying that shorelines can erode and change rapidly, not to mention rising and falling ocean levels.

d.      While shorelines have indeed changed much over the last 3400 years, sea-levels likely have not. Herodotus said in 450 BC (2500 year ago) that a canal needed to be dug between the Mediterranean sea to the Red Sea and it was a four days journey. (Herodotus 2.158) This means that the sea level was about as we see it today. Also we have can use the archeological site of El-kheleifeh which was ancient Elat, (1000 BC) to determine sea levels have really not changed much in 3000 years. From the topographical map of Tell el-kheleifeh, we can see that the structure is built lower than the 4 meters above sea level only 500 meters from the shore of the Red Sea. This is not ancient Ezion Geber, so it was not built on the shore line, but it is so close and so close to sea level, that we can be quite certain that sea level was not much higher than we see it today. Sure, the level of the fresh-water sea of Galilee and the Dead Sea are much lower today than what they were in the first century, but that is because it hardly rains any more in Israel and modern technology is pumping the water to keep a nation alive. Israel was once a natural oasis of plush greenery. That is why it was called the land of Milk (grasslands) and honey (flowers).

e.      The double coincidence is this: Although this “mouth-like” bay faces Baal-Zephon it is not itself Pi-Hahiroth, however it is in fact, the southern marker for the shoreline towards the Gulf of Aqaba where the Hebrew camp was located.

B. The positioning of the camp of Israel:

1.      Scripture says that Israel came to a dead end at Etham, then God told them to turn back and retrace their steps and camp directly beside the "Migdol" in order for pharaoh to say, "Now the Lord spoke to Moses, saying, "Tell the sons of Israel to turn back and camp before Pi-hahiroth, between Migdol and the sea; you shall camp in front of Baal-zephon, opposite it, by the sea. "For Pharaoh will say of the sons of Israel, 'They are wandering aimlessly in the land; the wilderness has shut them in.' "Thus I will harden Pharaoh's heart, and he will chase after them; and I will be honored through Pharaoh and all his army, and the Egyptians will know that I am the Lord." And they did so." Exodus 14:1-4

2.      Numbers 33:7: They journeyed from Etham and turned back to Pi-hahiroth, which faces Baal-zephon, and they camped before Migdol.

F. How the traditional choice for Pi-hahiroth fails: