a.    There are a few cryptic literary references to church buildings in the early 180-240 AD, but these are rare and uncertain.

b.   From 33 AD to the Edict of Milan in 315 AD, Christians did not have formal church buildings and their focus was to preach words of salvation in Christ as opposed to the inverted modern message of invite people to a church building to satisfy social needs.

c.    Archeology has confirmed that the first formal church building were posts 325 AD.

2.    For those who say we are without Bible authority for church buildings, we have the clear example of Christians using the synagogue as their “church building” for weekly Sunday communion and worship.

a.    Diaspora Christians would soon be expelled from synagogues and until the Byzantine age, worshipped without formal dedicated church buildings.

b.   While the synagogue was used for civic meetings, hostel etc, these functions were absent from the church for 300 years.

3.    When the Byzantines churches were of two basic types: “Coenobium” and “Laura” (lavra).

a.    “Coenobium”: For example the monastery at Khirbet El-Maqatir which the author excavated many seasons, was typical of the Coenobium type monasteries that included hostel services and was deliberately located beside a main highway.

b.   “Laura” (lavra). The Laura type were ascetic structures in remote areas, on cliffs, built into caves etc. where the “hermits” discouraged visitors and provided no hostel services”.

c.    Interesting to note that the Great (377-475 AD) was a hermit who joined the Laura east of Jerusalem and founded the “Euthymius Monastery” 428 AD as a Laura teaching school for his students. 8 Years after he died, the monastery was converted from Laura into communal Coenobium type of monastery.

b.   No octagonal synagogues are known to ever have been build.

c.    The Islamic “Dome of the Rock” built by the Muslims in the 7th century, was octagonal because the Muslims dug up the foundation of the Byzantine octagonal church and wrongly assumed it was the Holy of Holies of the Jewish Temple.

d.   Here is the octagonal Byzantine church in Jerusalem below Rachel Ramat, directly beside the highway: 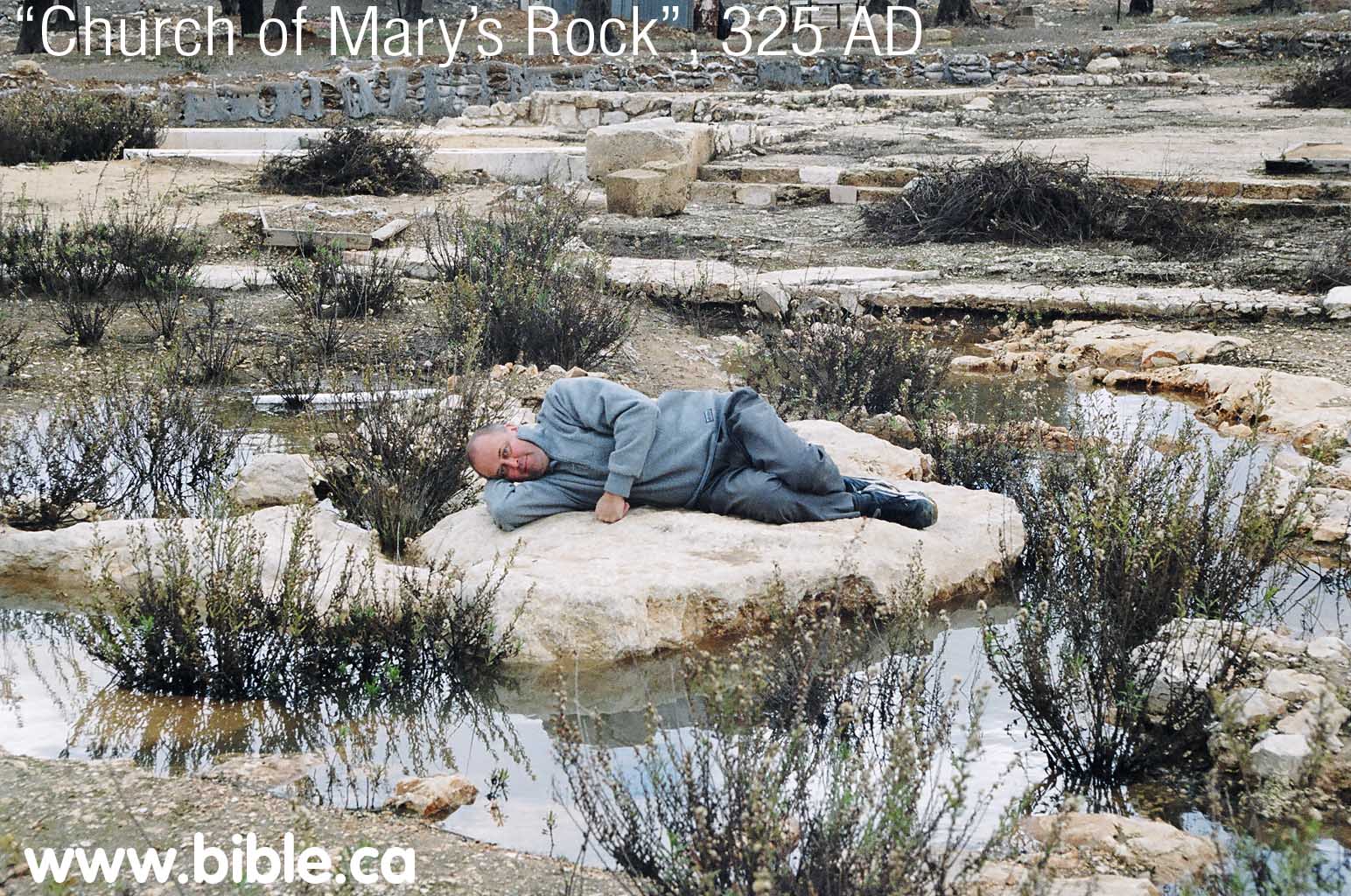 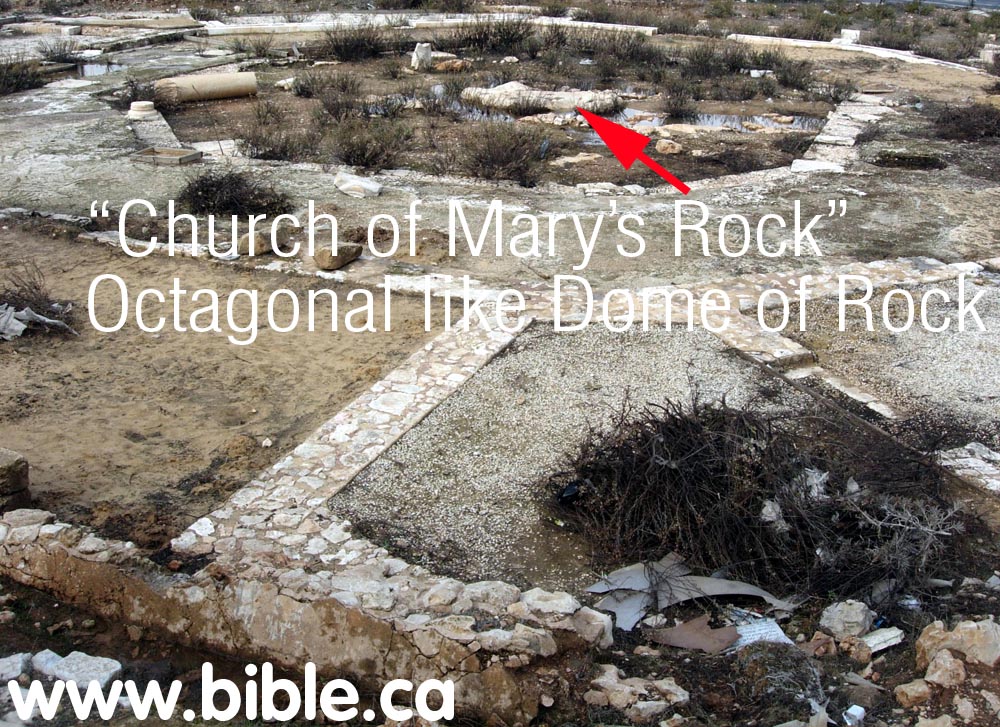 5.    Many examples of octagonal churches are known.

a.    Domus Aurea (Golden Church): “Antioch church”: 327 AD started by Constantine, 341 AD completed. It was one of five patriarchal churches in 387 AD which commemorated Apostle Paul’s home town of Antioch.

b.   Church of the Holy sepulchre in Jerusalem

c.    Church of Mary’s Rock between Jerusalem and Bethlehem

i.     Cathedral of SS Sergius, Bacchus and Leontius in Istanbul (Turkey)

k.    Dome of the Rock: 684 AD. There was an octagonal church foundation on the temple mount that the Muslims wrongly assumed was the foundations of the Holy of Holies. The Christians built the dome of the Rock for them which is an octagonal design borrowed directly from Byzantine churches.

a.    The Basilica style was used before 327 AD in synagogues. The Great Basilica synagogue of Alexandria dates to 41 AD and was destroyed in 117 AD by Trajan. It was the first, oldest and most glorious of any synagogue on earth as the Philo, Tosefta, Jerusalem and Babylonian Talmuds document.

b.   Text of Jerusalem Talmud, y. Sukk. 5:1, I.5.A–H: “It has been taught [in Tosefta Sukkah 4:6A-G, 250 AD]: Said R. Judah, “Whoever has never seen the double colonnade [the basilica-synagogue] of Alexandria in Egypt has never seen Israel’s glory in his entire life. [B] “It was a kind of large basilica, with one colonnade inside another. [C] “Sometimes there were [55b] twice as many people there as those who went forth from Egypt. [D] “Now there were seventy-one [Y.: seventy] golden thrones set up there, one for each of the seventy-one elders, each one worth twenty-five talents of gold, with a wooden platform in the middle. [E] “The minister of the synagogue stands on it, with flags in his hand. When one began to read, the other would wave the flags so the people would answer, ‘Amen,’ for each and every blessing. Then that one would wave the flags, and they would answer, ‘Amen.’ [F] “They did not sit in a jumble, but the goldsmiths sat by themselves, the silversmiths by themselves, the weavers by themselves, the bronze-workers by themselves, and the blacksmiths by themselves. [G] “All this why? So that when a traveller came along, [he could find his fellow craftsmen,] and on that basis he could gain a living” [T. Suk. 4:6]. [H] And who destroyed it all? It was the evil Trajan.” (Jerusalem Talmud, y. Sukk. 5:1, I.5.A–H, describing the second temple synagogue in Alexandria, 400 AD)

c.    “The word "basilica" is regularly used of churches and synagogues. The Roman basilica was a civic building, used for a variety of pur­poses: market, hank, stock exchange, tribunal, law court, and meeting place. Basilicas emerged in the Roman world by the second century B.C.E. Although the word is Greek ("royal building”), there is no known example of a Greek precursor to Roman structures. The word indicates function, not architectural form. The form it came to have was rectangular, of varying proportions, with entrances in either the short or long sides, and with a higher central portion divided from two lower side aisles by rows of columns. Usually there were clerestory win­dows above the columns to light the central space; often there was a second floor over the side aisles. Sometimes there was an apse or a pro­jection, used as a "tribunal," on one end or one side (later, sometimes at both ends). Christians and Jews adapted this shape for their pur­pose-built religious structures. Although the word is frequently used loosely of any room with columns, it is best to use it only when a num­ber of basilican elements are present. (Building Jewish in the Roman East, Peter Richardson, p126, 2004 AD)

7.    Discussing later synagogues: "The large quantity of archaeological finds relating to ancient synagogues is an important factor in any discussion of Hellenization and its effects in late antiquity. There is no aspect of the material remains of this institution which does not reflect some form or degree of interaction with the surrounding world. The very shapes and forms of most synagogue buildings were clearly borrowed from Roman models. The Galilean-type synagogue seems to have been adapted either from nearby Nabatean temple courtyards (theaters) or Roman basilicas. The large facades of these Galilean buildings which faced Jerusalem were typical of Roman facades on buildings, funerary monuments, or triumphal arches. The degree to which synagogues resembled Roman buildings is vividly reflected in a rabbinic discussion of a person who passed a pagan temple and, thinking it was a synagogue, proceeded to bow down before it. The very fact that the rabbis would invoke such an instance as a basis for a halakhic discussion indicates that such a reality was indeed a familiar phenomenon. Moreover, the basilica-like synagogues of the later Byzantine period likewise reflected the surrounding culture; in this case the model seems to have been contemporary churches. An architectural plan, which included an atrium, narthex, and sanctuary consisting of a nave and side aisles separated by two rows of columns, in addition to a chancel screen, seems to have been adopted by the Jews from Christian models. The same holds true with respect to the artistic depictions in these synagogues. Influence seems to have been a constant with the only variables being its extent and nature. On the one hand, depictions such as the zodiac and Helios, or a mosaic pattern of vine tendrils flowing from an amphora and forming medallions or representations of animals, fish, baskets, and assorted geometric shapes, are frequently used patterns borrowed directly from the surrounding Byzantine world. Even distinctly Jewish symbols, such as the Torah shrine, menorah, and shofar, were influenced by contemporary models and patterns. Stone moldings, which predominate in the art of the Galilean and Golan buildings, were clearly borrowed from traditions of Roman art in evidence throughout the eastern Mediterranean in late antiquity. Finally, the use of Aramaic and Greek, both lingua franca in the Roman East, in over 90% of the synagogue inscriptions in Palestine, bears testimony to the impact of the surrounding world. Many of the names of donors, particularly those in Greek, as well as the formulae invoked in many Greek inscriptions, were likewise borrowed from outside usage. There is certainly justification in assuming that this influence was not confined only to externalities. The introduction of piyyut into the liturgy was parallel to and perhaps even influenced by similar developments in the Byzantine church. One rabbinic tradition reports that in at least one fourth-century synagogue of Caesarea Jews did not know enough Hebrew to recite the basic Shema‘ prayer in the original Hebrew, but rather did so in Greek. One can assume that most, it not all, of the prayer service in that particular synagogue was in Greek, and this would have undoubtedly included the Torah-reading and sermon. Even the gradual transformation throughout late antiquity of the synagogue into a primarily religious institution with a very distinct holy dimension parallels more general lines of development in that society. By the late Byzantine period, synagogue orientation towards Jerusalem was much more definitive, Jewish religious symbols were far more prominent, inscriptions bore the words ‘holy place’, and the building was referred to as a ‘miniature temple’ or viewed as a modest substitute for the Jerusalem Temple." (The Revolutionary Effects of Archaeology on the Study of Jewish History: The Case of the Ancient Synagogue, L. I. Levine, The archaeology of Israel: Constructing the Past, Interpreting the Present, N. A. Silberman & D. Small, Vol. 237, p181, 1997 AD)