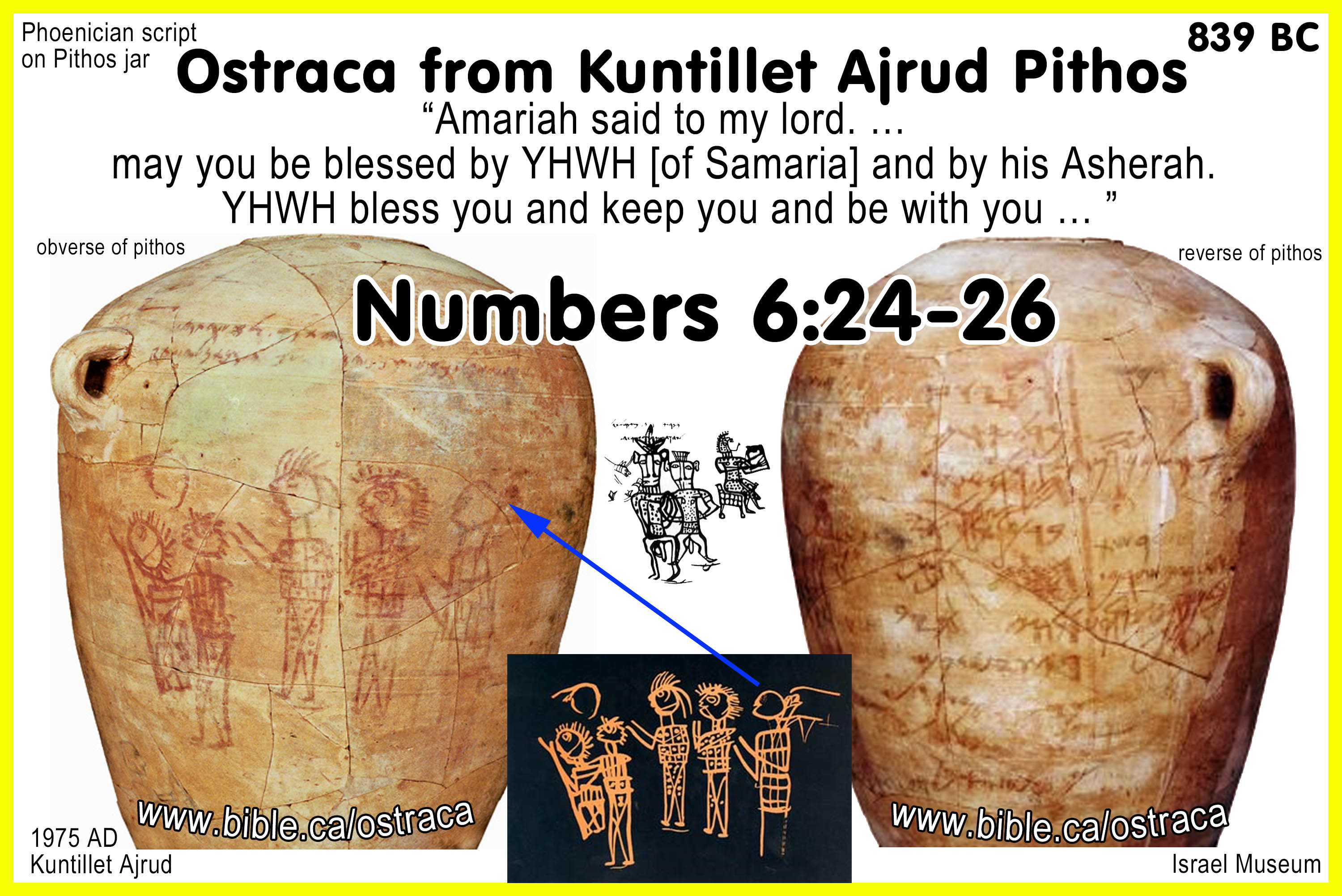 a.       Kuntillet Ajrud is probably most famous for the inscription found there that indicates a period of mixing paganism with pure monotheistic Judaism: "Amaryau said to my lord. ... may you be blessed by Yahweh and by his Asherah. Yahweh bless you and keep you and be with you".

b.      Founded as a Negev border fortress by Solomon, it was occupied by the pagan Jews from the corrupt northern tribes whose capital was Samaria.

c.       Notice that they are Jews worshipping YHWH, but then say that YHWH has a wife! (Consort or Asherah).

d.      Most striking is that this pagan inscription contains the oldest quotation of the Bible on earth from Numbers 6:24-26 “may the Lord bless and keep you”.

e.      Although the text is in Phoenician, it predates the famous silver scroll by 140 years! (See details about the Silver Scroll from Ketef Hinnom)

f.        The Phoenician inscription is not a direct match for the Torah words in Numbers 6:24, but it is clearly a paraphrase.

a.       Cohen dates the three successive structures from the time of Solomon.

c.       It has all the basic ear marks of a fortress with many similarities with, including the corner tower structures.

d.      Cohen believed Kuntillet Ajrud had three continuous periods of occupation by a centralized government under the direction of several kings of Judah beginning with Solomon.

e.      Secondary use of a fortress structure build by Solomon at the end of the 8th century BC is still a possibility.

2.      One of the problems in the dating, is that those who date the site later are known reductionists, ie they view the monarchy of David and Solomon as a myth.

a.       It is important to keep this in mind because future excavations and further examinations of the pottery by biblical conservative archeologists may one day confirm Cohen’s original dating of the site to the time of Solomon.

b.      Reductionists Finkelstein and Ussishkin, both of whom view “David and Solomon as another Bible myth”, reject Cohen's view that this was built by Solomon and therefore date the structure to the 9th century or later.

c.       Having said this, we must take into careful consideration the facts and details because their dating of the site to the last days of Elisha may be correct.

a.       It is tantalizing to try to date Kuntillet Ajrud, to pinpoint in whose reign this religious center was established. The pottery and the form of the script suggests the end of the 9th to the beginning of the 8th centuries. (Did Yahweh Have a Consort, Kuntillet Ajrud, Ze'ev Meshel, 1979 AD)

b.      The date of the site, determined by typological and paleographic analysis, and by the need to identify an historical period in which N Israelite influence over Judah was especially strong, points to the period after the death of Jehoshaphat of Judah (ca. 850 B.C.E.). The reigns of Jehoram, Ahaziah, and Athaliah (between 850 and 837 B.C.E.) seem distinct possibilities. However, the period of Joash king of Israel (ca. 801-786 B.C.E.), who captured Amaziah king of Judah, broke down the wall of Jerusalem, and seized the treasures of the Jerusalem temple and palace (2 Kgs 14:1-16 = 2 Chr 25:1-24) seems especially well suited. This would be reinforced if the reconstruction of on the top line of the Bes figurine inscription indeed is a reference to Joash. It may tentatively be suggested that Joash intended to gain direct access to the Red Sea, and that this was the reason for the war between the two kings. The victory of Joash is reflected in the construction of the buildings at Kuntillet Ajrud, and accounts for the concurrent references to the "Yahweh of Samaria" and the "Yahweh of Teman"; i.e., Samaria's god (as well as its king) having dominion over the entire region through which one reached "Teman" (meaning "the far south"). (Kuntillet Ajrud, Ze'ev Meshel, Anchor Bible Dictionary, 1991 AD)

B. The structure, finds a lack of Negev ware pottery found:

1.        Many ostraca were found at Kuntillet Ajrud, including pithos jars that were reconstructed.

a.           In 1975-76 several Hebrew and Phoenician inscriptions were discovered in a fortress-like structure at Kuntillet Ajrud (Kuntillet Quraiyah) in the northern Sinai. (A Note on an Inscription from Kuntillet Ajrud, Debra A. Chase, 1982 AD)

b.           The unusual finds (especially the inscriptions and pictures) testify to the- uniqueness of the site. The subject matter of the inscriptions, the references to various deities, and the presence of dedicated vessels all suggest that Kuntillet Ajrad was a religious center; however, the lack of things usually associated with ritual sacrifice (e.g., altars) and the architectural layout of the site indicate that the remains are not those of a temple. It appears that the site may have served as a "wayside shrine" that, due to its location, was associated with journeys of the Israelite kings to Elat and to Ezion-geber, and perhaps also with the travels of pilgrims to S Sinai. These were able to journey S along the Darb el-Ghazza from Kadesh-barnea, stopping at the place to make dedications to Israel's god in the bench room of the main building. The strong N (Israelite, not Judean) influence in the remains seems to connect Kuntillet Ajrud with the N kingdom of Israel or with one of the Judean kings closely aligned with the N kingdom of Israel. This N influence is evident in the reference to "Yahweh of Samaria," in the Phoenician-style writing, in the cosmopolitan style and motifs of the decorative and pictorial artwork, in the pottery types, and in the onomastic conventions (names ending in -yau, and not -yahu). The site, occupied for only a few years, was likely inhabited by a small group of priests dispatched from the N kingdom of Israel with an officer at their head. They were sustained by the various sacrifices and tithes that were sent as provisions primarily from Judah; in return, they rendered their cultic services to travelers. (Kuntillet Ajrud, Ze'ev Meshel, Anchor Bible Dictionary, 1991 AD)

c.           When the inscriptions were read, we discovered that they provided clear evidence that Kuntillet Ajrud was not merely a resting place for desert travelers but was principally a religious center. (Did Yahweh Have a Consort, Kuntillet Ajrud, Ze'ev Meshel, 1979 AD)

d.           It would be tempting to call the building at Kuntillet Ajrud a temple, but it bears none of the architectural features we customarily associate with a temple. The plan of the building does not contain a holy of holies, nor does it conform to the plan of other temples known from excavations in the Near East. Moreover, we found the remains of no cult objects, such as animal altars or incense burners or cult altars. (Did Yahweh Have a Consort, Kuntillet Ajrud, Ze'ev Meshel, 1979 AD)

e.           On the other hand, although the building was probably not a temple, we think that it was a religious center of some kind where people deposited their offerings in the bench-room. (Did Yahweh Have a Consort, Kuntillet Ajrud, Ze'ev Meshel, 1979 AD)

f.            The site represents, in our opinion, a religious center which had some connection with the journeys of the Judaean kings to Eilat, Ezion-Geber and perhaps even to southern Sinai. The establishment of this center may have come about through identification of the site with one of the Israelite traditions concerning Sinai.

a.           OLDEST TEXT OF THE BIBLE ON EARTH: Phoenician inscription on Pithos Jar: “Amariah said to my lord. … may you be blessed by YHWH [of Samaria] and by his Asherah. YHWH bless you and keep you and be with you … ”

ii.      Most striking is that this pagan inscription contains the oldest quotation of the Bible on earth from Numbers 6:24-26 “may the Lord bless and keep you”. Although the text is in Phoenician, it predates the famous silver scroll by 130 years!

iiI.     The fact the words in the inscription are different than the Hebrew words found in Numbers 6:24, do not change the fact that it was a paraphrase of this most famous Priestly benediction that was widely used.

iV.      See details about the Silver Scroll from Ketef Hinnom 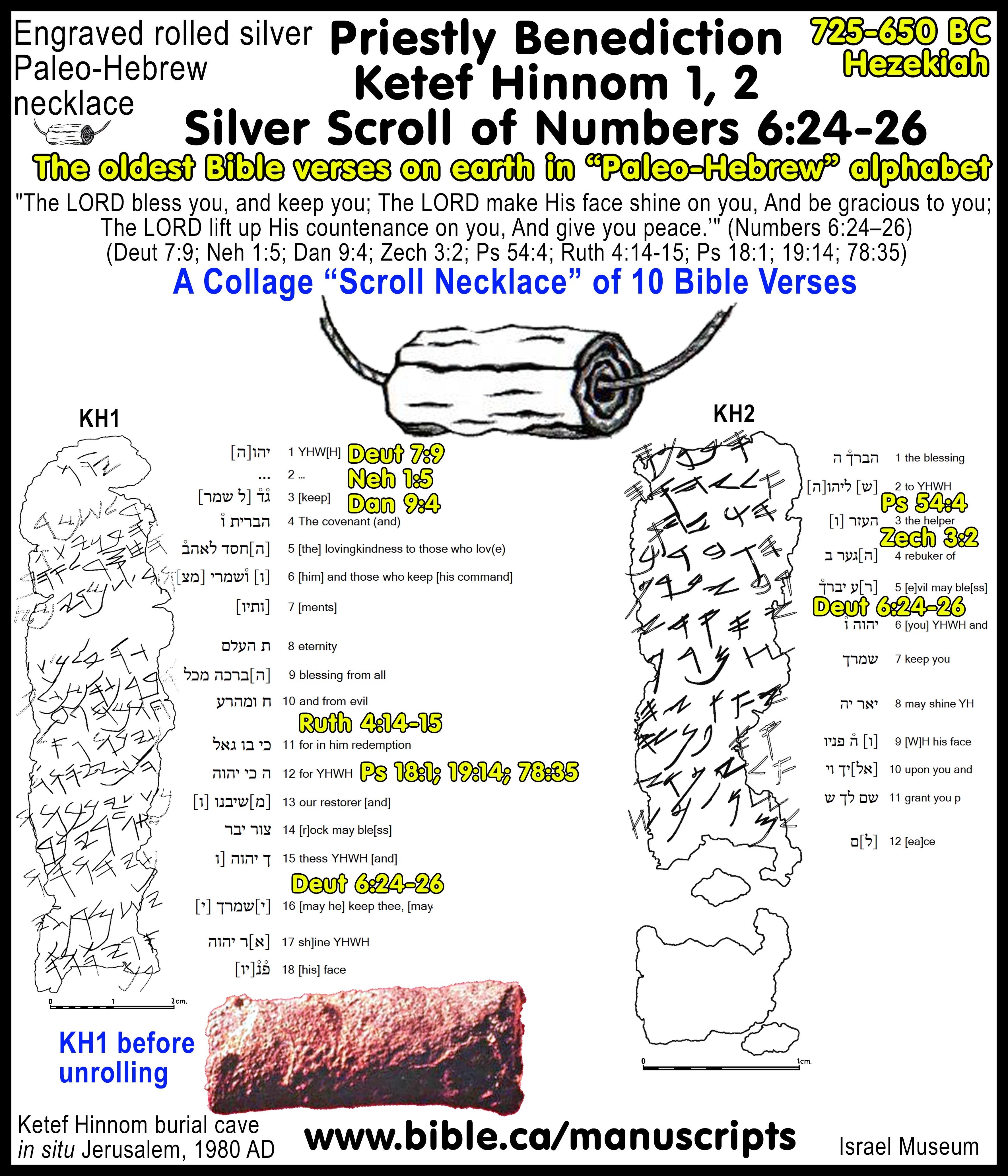 b.           Pithos Jar inscription: “Utterance of ʾAshyaw the king: “Say to Yehallel and to Yawʿasah and to […]: ‘I bless you by Yahweh of Samaria and his asherah!”

i.      Notice the connection with the Law of Moses and the location where this inscription was found in situ in the door lentil. 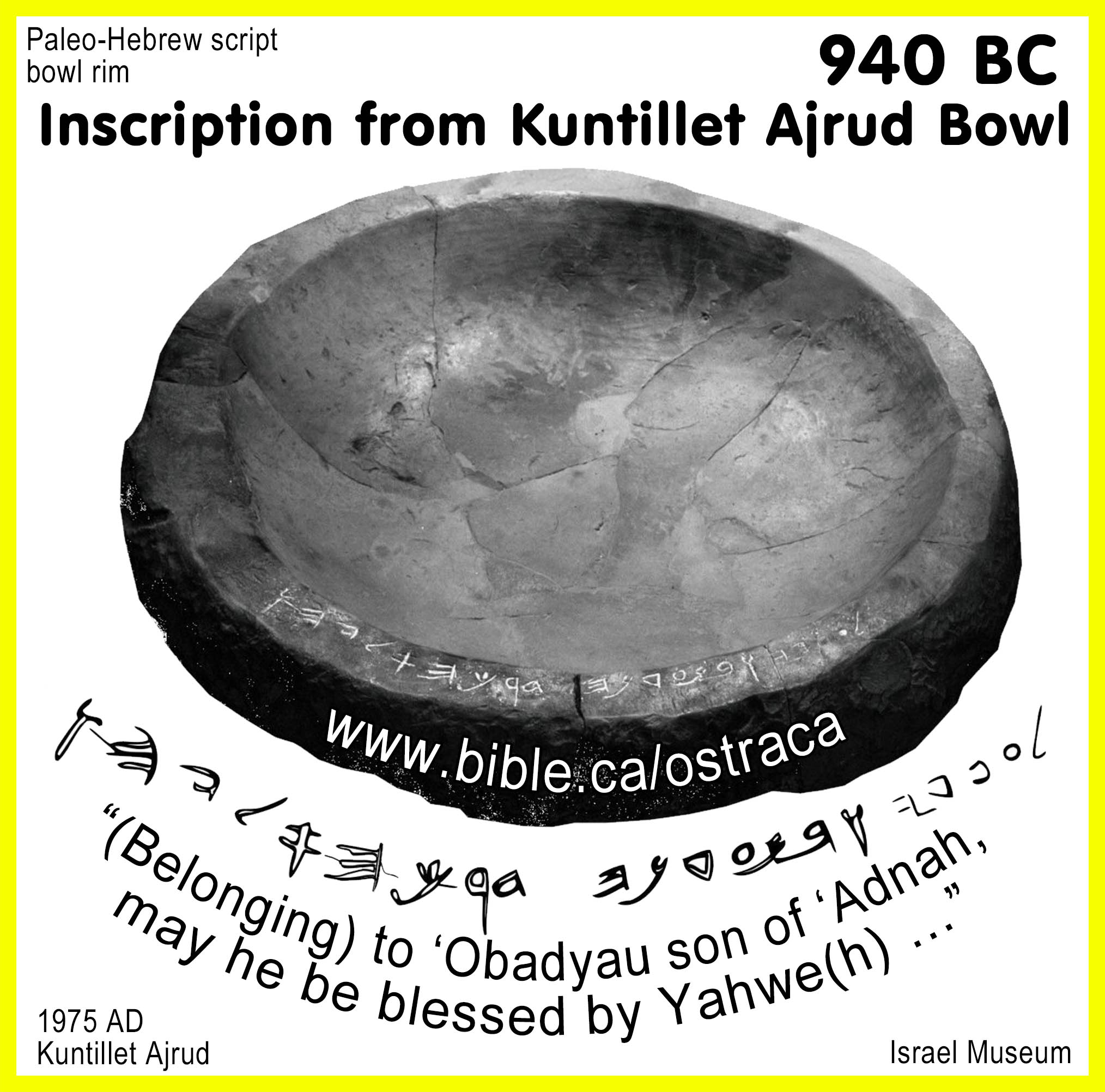 1.      The weight of archeological evidence for Kuntillet Ajrud points to a single occupation site by the northern kingdom of Israel, dating to 830-775 BC.

a.       The emphasis of YHWH of Samaria (the capital city of the 10 northern tribes) is important because the site is located deep inside the southern Judean kingdom.

b.      The mix of paganism and YHWH worship is characteristic of both Israel and Judah during the period.

c.       The reforms to stamp out idolatry by Asa king of Judah and Jehu king of Israel, were as quickly forgotten as the latter reforms of Josiah.

d.      We can point to the very dominant reign of king Jehu of Israel during the weak during the tumultuous reign of Queen Athaliah of Judah fit a date of 830-775 BC perfectly.

2.       Regardless of whether or not it was founded as a border fortress by Solomon around 950 BC, all agree that the many ostraca do date from the period of 830-775 BC.

3.      The oldest text of the Bible every excavated is found on one of the pithos jars. While it is in Phoenician script, not Paleo-Hebrew and while it uses different words than in the Torah, it is clearly a paraphrase of this most famous “priestly benediction” (Num 6:24f) also seen in the Silver Scroll that dates 130 years later.