1.       Israel travelled in stages between the wilderness of Sin and Rephidim with Dophkah and Alush in-between.

a.         Little is known about Dophkah and Alush except that they are located in difficult terrain between the wilderness of Sin and Rephidim.

b.        From Goshen to Mt. Sinai the topography was flat, wide and easy except between Dophkah and Alush, which infers it was canyon travel through the mountains.

b.        " Then all the congregation of the sons of Israel journeyed by stages from the wilderness of Sin, according to the command of the Lord, and camped at Rephidim, and there was no water for the people to drink." Exodus 17:1

a.         “Well then, “they set out from Raphaca [Rephidim] and come to Halus [Alush].” Halus translates as “toils.” Do not be surprised that toils follow health. For the soul acquires health from God in order to accept toils with delight and not unwillingly. For it will be said to it: “You will eat the toils of your harvest; you are blessed, and it will be well with you.””(Origen, Homilies on Numbers 27.12., 400 AD)

A. Journeying in Stages:

1.       Israel left the Wilderness of Sin on day 14 (from Red Sea crossing) as a single unit, but once they arrived at Dophkah, they shuttled through the mountain canyons in stages through Alush over 2-3 days to reach Rephidim.

2.       Sunday, day 39 from Goshen, day 14 from the Red Sea: All 3 million Hebrews leave the Wilderness of Sin and arrive at Dophkah to camp the night.

3.       Monday, day 40 from Goshen, day 15 from the Red Sea: Stages of small groups of Hebrews depart Dophkah and begin the 23 km canyon travel and camp at Alush that night. The remaining Hebrews camp a second night at Dophkah.

4.       Tuesday, day 41 from Goshen, day 16 from the Red Sea: The last of the Hebrews leave Dophkah and camp at Alush while the lead group journeyed ahead 30 km to reach Rephidim.

8.       Second Sabbath, day 45 from Goshen, day 20 from the Red Sea: Jethro offers his advice as Israel celebrates their second sabbath at Rephidim.

9.       Sunday, day 46 from Goshen, day 21 from the Red Sea: Moses implements Jethro’s advice and leaves Rephidim for Mt. Sinai: Ex 18:27. Israel arrives in the Wilderness of Sinai after sunset day 47 from Goshen. 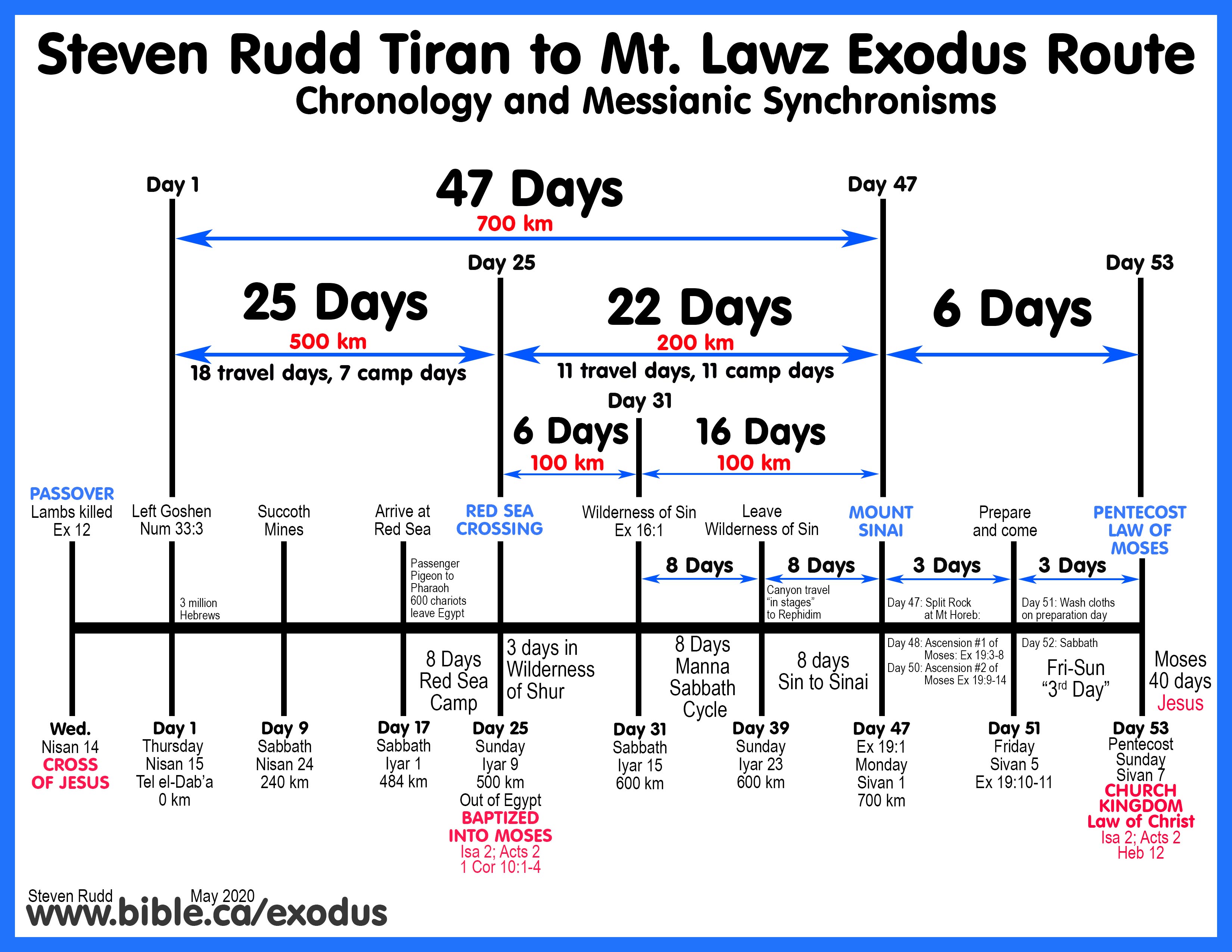 C. Calendar of events from Goshen to Sinai: Days 1-47